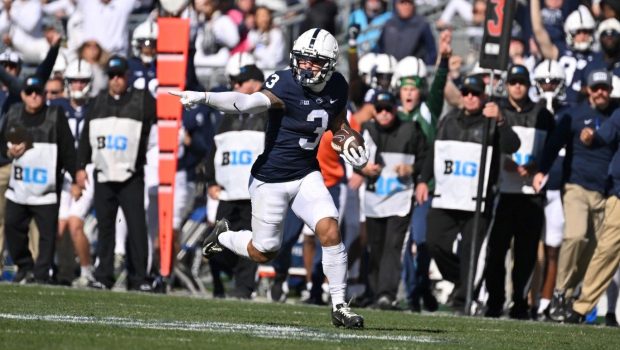 PENN STATE FINDS THAT OHIO STATE’S OUT OF THEIR LEAGUE!

J.T. Tuimoloau’s strip sack and pick-6 in the fourth quarter helped the No. 2 Ohio State Buckeyes erase a deficit and pull away from No. 13 Penn State 44-31.

The former five-star recruit from Seattle said the last time he intercepted a pass was as a sophomore in high school and he never remembered getting two in one game.

“I mean, it hasn’t hit yet,” Tuimoloau said about having an all-time great game on such a big stage. “I just take it as a great team win right now.”

The 6-foot-4, 270 pounder’s first interception of his career came in the first quarter on a play in which he dropped into coverage and broke quickly on a sideline throw to a running back.

“Brother’s an athlete, you can’t teach that,” said fellow defensive end, Zach Harrison, who had the interception on Tuimoloau’s tipped pass.

Tuimoloau said the tipped pass to Harrison was his favorite of the game-changing plays he made.

Day said Tuimoloau has been playing well this season, getting pressure despite not putting up big stats. He had only one sack coming into the game.

“He been right there,” Day said. “He’s almost been like the unsung hero of the defense.”

On this day, Tuimoloau outshined all the Buckeyes stars.

As has often been the case when these teams get together lately, the Buckeyes were a double-digit favorite and the Nittany Lions (6-2, 3-2) played them tough.

In this case, though, Penn State didn’t just hang around. The Nittany Lions went up 21-16 with 9:26 remaining in the fourth quarter on a tough 1-yard touchdown run by Kaytron Allen on fourth down.

Ohio State then went on a 28-3 run, with Tuimoloau providing the key plays after the Buckeyes went up 23-21.

Tuimoloau recovered the fumble after swiping the ball from Sean Clifford with 8:26 left in the fourth quarter. One play later, Stroud connected with Cade Stover, who rumbled through the Penn State defense for a 24-yard touchdown to make it 30-21.

“Turn of events, a momentum swing and they converted on it,” said Clifford, who threw for 371 yards.

Clifford, the sixth-year quarterback whose up and down play has had some Nittany Lions fans clamoring to see more of five-star freshman Drew Allar, threw three touchdown passes to become Penn State’s career leader with 78, passing Trace McSorley. He also committed four turnovers.

The final one went for Tuimoloau’s 14-yard interception return touchdown to make it 44-24 with 2:42 left.

“We knew we were going to have to play four quarters today,” Day said.

TreVeyon Henderson scored twice in Ohio State’s fourth-quarter outburst, including a 41-yard run 35 seconds after Penn State took the lead. He added a 7-yard touchdown run with 2:52 left to make it 37-24.