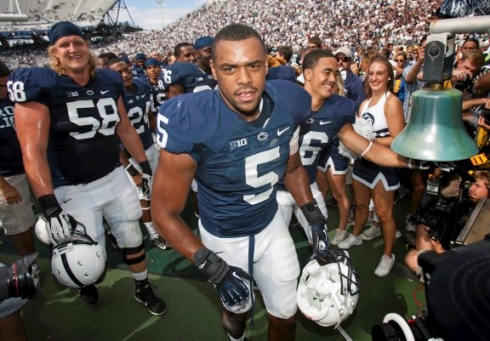 PENN STATE LB WARTMAN’S RETURN A BIG PLUS AGAINST MICHIGAN

Why is a bye week an advantage?

To listen to Penn State coach James Franklin, the week off after the 29-6 loss to Northwestern is helping the Nits as they head to Michigan for a Saturday night game.

“I think obviously because of how we went into the bye week, I think it kind of hits home with guys in terms of things we’ve been trying to correct, the details, the footwork, eliminate some of the missed assignments; things that we can control,” Franklin said.

“Little bit more of a sense of urgency to get those things fixed, but it’s not major things.”

That’s the plus of a bye week to review mistakes and have plenty of time to chew on necessary corrections without getting on the field to try them out.

Another item on the list of pluses the head coach noticed following an ideal week included the injury report.

“When you get the injury report from Tim Bream it’s a little bit smaller than it was a couple weeks before that,” he said, “but for the most part I think it was good to get time off for all of us.

“Now, we’re excited to get back out there on the field and play against Michigan.”

Linebacker Nyeem Wartman was back on the field, in pads, Wednesday evening.

It comes as little surprise that the outside linebacker was back practicing after sitting out the Northwestern game with his right arm in a sling. Franklin said he’d be ready for the showdown with Michigan immediately following the homecoming loss to the Wildcats.

“There is no doubt that we missed Nyeem [Wartman],” Franklin said after the game. “He’ll be back for our next game.”

The redshirt sophomore practiced with a taped right hand and wrist area.

Penn State’s offensive line has received its fair share of criticism from virtually every corner over the last five weeks.

Franklin, who claims to read and watch anything he can regarding his program, has undoubtedly seen most of it. He said the message coming from inside the program is what is ultimately important, though.

“I think what happens on most football teams is, there’s always noise outside but you try to limit the noise,” Franklin said. “I think what really matters is how we interact with one another in meetings and things like that.

“They know how we feel about them, I know how hard they’re working, and they want to play as well as everybody else.”

The head coach then reiterated that he is seeing progress from offensive line coach Herb Hand’s unit.

“Is it as fast as we would all like? Probably not, but you can say that about a lot of positions,” Franklin said. “We’re just going to stay positive, and keep grinding and keep working, and find ways to get the ball in the end zone.”