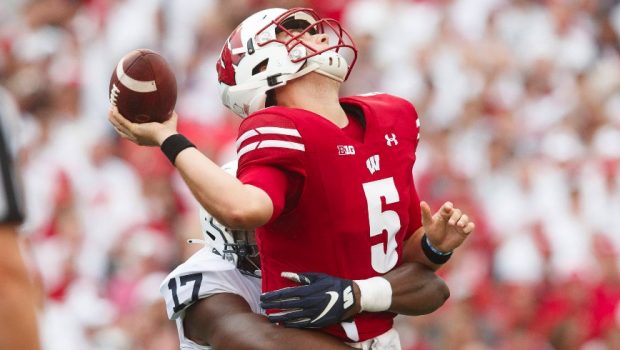 PENN STATE IS BACK! NITS PICK OFF, KNOCK OFF FAVED WISCONSIN

Penn State more than turned the page on last season’s 4-5 disaster and outlasted favored Wisconsin, 16-10, in the season opener at Madison

The Badgers had first-and-goal at the 1 in the closing minutes on a drive that included a targeting penalty on Ellis Brooks that knocked Penn State’s top tackler out of the game.

Mertz lost the ball on an apparent handoff attempt on first down, though Wisconsin’s Isaac Guerendo recovered the fumble at the 4. Guerendo lost a yard on second down, then Joey Porter Jr. broke up a pass to Jack Dunn.

On fourth down, Mertz attempted a pass across the middle to tight end Jake Ferguson, but Brisker picked it off and delivered a 41-yard return with 2:16 remaining.

Wisconsin got the ball back on its own 18 with 1:11 left and got all the way to the Penn State 25 with 26 seconds remaining, thanks in part to a personal foul on Arnold Ebiketie. But after an intentional grounding call pushed Wisconsin back to the 32, Brown intercepted a Mertz pass on the game’s final play.

Noah Cain broke a 10-all tie and put Penn State (1-0) ahead for good with a 2-yard touchdown run with 9:17 remaining, though Jonathan Stout’s extra-point attempt bounced off the left upright. Stout also missed a 23-yard field goal.

Jahan Dotson had a 49-yard touchdown catch for Penn State and also set up Cain’s score with a 42-yard reception. He finished with five catches for 102 yards.

Wisconsin was led by Chez Mellusi, who rushed for 121 yards and a touchdown on 31 carries in his Badgers debut. Mellusi had just 27 carries all season last year while playing for Clemson.

It came down to two defensive stands from the Nittany Lions. The first was a goal line stand.

On the ensuing possession, Wisconsin drove deep into Penn State territory. How deep? The Badgers had first-and-goal from the PSU 1-yard line following a fantastic third-down catch from Danny Davis on the previous play.

But on the next play, a Wisconsin fumble pushed the Badgers back to the 8-yard line. Three plays later, on fourth-and-goal from the 8, Wisconsin QB Graham Mertz was picked off by Penn State safety Jaquan Brisker.

Brisker returned the INT out toward midfield and put the ball back in the hands of the PSU offense. PSU was able to take some time off the clock, but Wisconsin still had time.

The Badgers would advance all the way to the Penn State 25, but another Mertz interception sealed Wisconsin’s fate and allowed the Nittany Lions to escape Camp Randall with a hard fought victory.