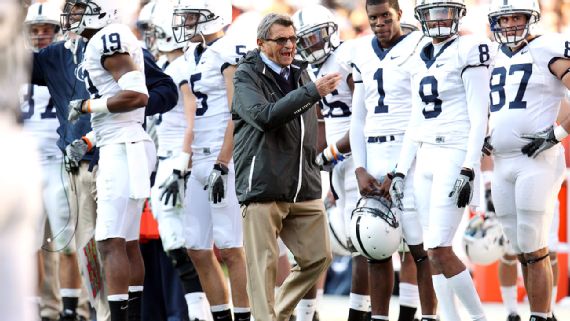 Two short video presentations during yesterday’s home game against Temple paid homage to the controversial football coach, spotlighting the players he led and other students “impacted by him.” The occasion marked 50 years since Mr. Paterno’s first game as a head coach at the school. “It’s baby steps,” said Franco Harris (left), a former running back under Paterno and supporter of the Paterno family. He said the commemoration — which Penn State did not cast as an honor — showed the school’s movement toward “not being scared to be associated with Joe.”

Thousands of fans stood and cheered the tributes, a long-anticipated but divisive acknowledgment following the school’s sexual abuse scandal. The university board of trustees fired Paterno just days after the November 2011 arrest of Jerry Sandusky, a retired defensive coordinator now convicted of abusing 10 boys over 15 years.

Although Mr. Paterno was not charged, a disputed review at Penn State found that he and other university officials knew — or should have known — as early as 1998 about abuse concerns involving Sandusky. Claims revealed this summer suggest Mr. Paterno may have heard a similar complaint as far back as 1976.

He died in January 2012 at age 85, before those particular allegations emerged. His family and supporters have denied intimations of a cover-up that enabled abuse.

Still, critics of the tributes said the public salute was premature at best. The student-run newspaper here, the Daily Collegian, editorialized against the gesture, writing that Penn State is “bigger than one person.”

“There is a cult here. I truly believe that if you can’t see there are cult-ish tendencies at this school, then you’re probably part” of them, said Andrew Limauro, 19, a Penn State sophomore who led an online petition against the commemoration.

Penn State administrators did not grant interviews last week about the recognition effort, which the school timed with a halftime appearance by members of Paterno’s 1966 team.

“We understand people differ over this decision,” Mr. Lokman said. “There are hundreds of lettermen who were impacted positively by Coach Paterno, and take pride in [Saturday’s] commemoration, not to mention students across the university whose Paterno Fellows scholarships make their educations possible.”

Penn State named the scholarship program for Paterno and his wife, Sue, upon its introduction in 2008. She commended the university last week for highlighting former players in its tributes.

“While we are pleased [school officials] have acknowledged Joe’s contributions, we communicated to the administration that we would like the focus for this event to remain on the players,” Mrs. Paterno said in a statement Thursday. She was not available for an interview, a spokesman said.

The Paterno family joined a group of football lettermen Friday night to host a private reunion near the football stadium, according to Mrs. Paterno’s statement. She said that gathering was to laud the contributions of Penn State football players “to the university and to society.”

“It honors the bonds of brotherhood and unity formed here and carried forward in the years since they left their alma mater,” Mrs. Paterno said.

School trustee Anthony Lubrano said she planned the Friday event to celebrate “the legacy of the ‘Grand Experiment,’” Paterno’s vision for his players to dominate both on the field and in their academics.

“There’s no question in my mind that commemorating this date in history is wholly appropriate,” Lubrano said yesterday. He said he hopes the university will soon go further and outright honor Mr. Paterno.

The school removed the coach’s statue from the east side of Beaver Stadium in July 2012, about 10 days after internal reviewers concluded that Mr. Paterno and three former executives did not protect against Sandusky and concealed crucial information about the child predator.

Those administrators — Tim Curley, Gary Schultz and Graham Spanier — are fighting criminal charges that they failed to alert authorities about Sandusky.