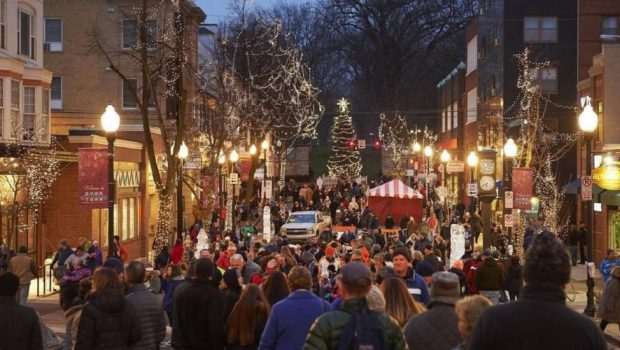 A scene from last year’s Christmas shopping on College Avenue.

Nittany Lions football is an important part of the culture in State College, Pa.

A critical part of the student and alumni experience.

And a massive chunk of the economic pie, on and off campus.

If football season had been postponed, the Big Ten’s 14 affiliates each would have lost some $100 million in revenue. Penn State draws nearly $80 million into State College’s local economy.

“Finances were going to be a catastrophe,” Penn State president Eric Barron says.

“I’ve got one person on a shoulder saying, ‘Open up full-bore; fill the stadium, fill the classrooms.’ I have on my other shoulder, ‘Don’t you dare.’ ”

To discourage fans from gathering, the Big Ten will play in empty stadiums.

Penn State even banned tailgating. Before students returned for in-person classes, the school required them to pledge to wear face coverings and avoid crowds.

State College has instituted ordinances that require masks in public places and prohibit gatherings of more than 10 people.