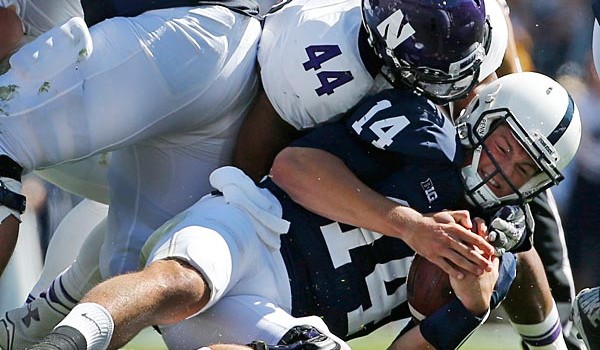 PENN STATE AND HACKENBERG COME CRASHING BACK TO EARTH

Is this the real Penn State?

And, just as importantly, is this the level that quarterback Christian Hackenberg has settled into?

Saturday’s 29-6 loss to Northwestern should be a wake-up call for PSU and Nittany Nation because the blowout wasn’t that close. Northwestern dominated wire-to-wire.

Forget that this was James Franklin’s first loss, or that the defense once again didn’t look as fierce against a team that could spread the field and move quickly.

Forget that Saturday morning, Penn State had Big Ten title hopes and, by 3 p.m., the Pinstripe Bowl was starting to look pretty good.

Penn State’s future, after all, is not what happens in December. It’s what happens long after that, and so much of that depends on how Hackenberg progresses through the tough times.

Saturday’s game was one of those tough times, one of those games that can either make a quarterback better or send him spiraling into the quicksand.

Don’t waste your time looking for someone with a positive report on how Penn State played. There isn’t one this time. The offensive line blocked poorly. The special teams weren’t good. The defense couldn’t get off the field in key spots.

For once, Hackenberg struggled and never got going. Never found the rhythm.

He completed less than half of his passes. He got sacked four times and harassed by a Northwestern defense unafraid of Penn State’s blocking schemes too many other times to count. Unbelievably, he hasn’t thrown a touchdown pass now in three straight games.

“I think I missed a couple throws,” Hackenberg said. “Left them on the field. Those hurt a lot. Have to be able to make those. I feel like I could have rallied the troops a little more at the end. I could have done my part more.”

The old saying is that you’re never as good as you look when you win or as bad as you look when you lose. That’s so true, and for sure, there were some extenuating circumstances in this one for Hackenberg. His offensive line did a pedestrian job at best trying to protect him, and coach James Franklin admitted after the game was over that the coaching staff was going to have to find ways to keep their star quarterback’s jersey clean.

After Penn State’s thrashing of Massachusetts on Sept. 20, you read about how easy football can be when you have a pretty good quarterback and a running game that is clicking in every way. But the offensive line that didn’t protect Hackenberg didn’t do Bill Belton or Zach Zwinak or Akeel Lynch any favors either. The Nittany Lions gained just 50 yards rushing on 25 carries and, at one point, passed on 16 consecutive plays in the second half.

Northwestern’s defense never really had to guess what was coming.

There are weeks when Hackenberg looks like a seasoned 29-year-old quarterback. But it’s naive to think there won’t be times when he’ll look like a 19-year-old sophomore seeing things for the first time and trying to put too much of the team on his shoulders. Saturday, he looked like a battered quarterback collapsing under the weight, powerless to stop the inevitable, not knowing where to throw or when to turn, and vice versa.

“Obviously, he should not be hit,” tight end Jesse James vented. “That’s our core goal. We have to get to that. That’s on all of us, the tight ends, the receivers and the backs as well as the offensive line. (Receivers) have to get out of our cuts a little faster and make things a little quicker for him.

“I think he does a great job getting the ball out where it should be. He doesn’t let it get to him.”

That has been the magic of Hackenberg so far in his Penn State career. Nothing has gotten to him. Not Syracuse’s tenacity or Michigan’s second-half rally last season. Not UCF’s comeback or Rutgers’ emotion this season.

But last year’s games came when he was protected very well by a solid offensive line, and this season’s came when early enough that his body was able to shake off the jolt of getting hit.

It’s fair to wonder if this is wearing on him, or at least if it will. The pressure was so constant Saturday that he never managed to quite get his timing down. On the first play of the fourth quarter — in a game the Nittany Lions were within eight points of tying — he rushed a throw toward receiver DaeSean Hamilton that linebacker Anthony Walker picked off and took, unabated, to the end zone for a back-breaking 49-yard touchdown return.

On the next play from scrimmage, Hackenberg looked upfield, holding onto the ball too long as Xavier Washington drilled him and forced a fumble that Northwestern recovered. Seven plays later, Northwestern was in the end zone again, and the rout was on.

This time, Hackenberg tried to do too much in the fourth quarter, and it cost his team.

This season can go two ways from here. Hackenberg can recover and play not how he can, but how he has to, in order to give this team the best chance to beat some teams in the Big Ten. Or, he can shoulder even more of the burden and stumble even more.

“Every loss hurts — a lot,” Hackenberg said. “Ultimately, we prepare each week and put all our effort toward winning and preparing to the best of our ability. When we’re not able to go do that, they all leave a void. I wouldn’t say one loss feels worse than another. They all suck.”