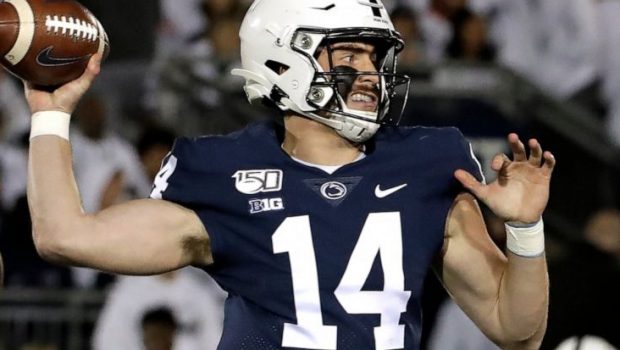 KJ Hamler snagged a perfectly thrown Sean Clifford 53-yard touchdown pass to propel No. 7 Penn State to a 28-21 win over No. 16 Michigan.

Clifford hit Hamler on a 25-yard pass to start the scoring, hooked up with tight end Pat Freiermuth for a 17-yard touchdown and ran for a 1-yard score to pace Penn State’s offense.

Hamler also had a 100-yard kickoff return to start the second half called back on a holding penalty. That would’ve come in handy as Penn State’s offense went cold for much of the second half.

The Wolverines battled back from a 21-7 halftime deficit and with just over two minutes to play, had a chance to tie the game on fourth-and-goal from Penn State’s 3. But Michigan wideout Ronnie Bell dropped a potential tying touchdown with Penn State safety Lamont Wade playing tight coverage.

The Nittany Lions took control of the game early. Clifford hooked up with Jahan Dotson for 37 yards to set up the scoring toss to Freiermuth who beat Khaleke Hudson in coverage.

Penn State went up 14-0 on its next drive when Clifford scored on a 1-yard run made easier by a 44-yard rush from Ricky Slade. It got easier when back-to-back Michigan offside penalties moved the ball to the 1.

The Wolverines cut Penn State’s lead to 21-7 with an eight-play drive that burned 4:27 before halftime. It ended with Zach Charbonnet beating Penn State defenders to the end zone on a 12-yard run.