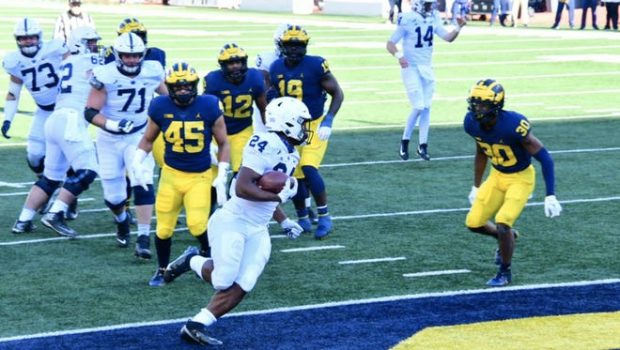 PENN STATE FINALLY MET A TEAM IT COULD BEAT: 27-17 AT MICHIGAN!

You’ve got to hand it to coach James Franklin and his Penn State Nittany Lions.

They finally won a game during this 2020 season.

True, it was against the Michigan Wolverines, who are probably just as bad as the Nits even though they now have a 2-4 record.

This was the first time in. history Penn State and Michigan played when they both had a losing record.

Clifford, back in the starting lineup after getting benched for Will Levis, had only 163 passing yards, but he avoided costly turnovers that have plagued him this season, rushed for 73 yards and a score and made some timely third-down throws to Jahan Dotson on a fourth-quarter scoring drive that gave the Nittany Lions a two-score lead.

Parker Washington, another true freshman, also had a big game for PSU with nine catches for 93 yards. He was featured early and helped Penn State take a 17-7 lead into halftime.

On the Michigan side, Saturday’s game marked the first career start for Cade McNamara, who came in off the bench and played hero in last week’s triple-overtime win over Rutgers.

Against Penn State, McNamara really struggled. He left the game early with what appeared to be a shoulder injury, but eventually returned to the ballgame. When he did, he was wholly ineffective. He completed just 12 of his 25 pass attempts for 91 yards.

Michigan was able to run the ball behind Hassan Haskins. Haskins put up 101 yards and two scores, including a two-yarder that cut Penn State’s lead to 20-17 early in the fourth quarter. But Penn State immediately responded with a touchdown of its own to increase its lead back to 10 points.

With Michigan completely incapable of throwing the ball, any attempt at a comeback went nowhere. And when 6-foot-5, 243-pound QB Joe Milton was stuffed on a QB sneak on fourth down, that pretty much sealed the victory for Penn State, who then took over on offense and ran out the clock without much resistance.