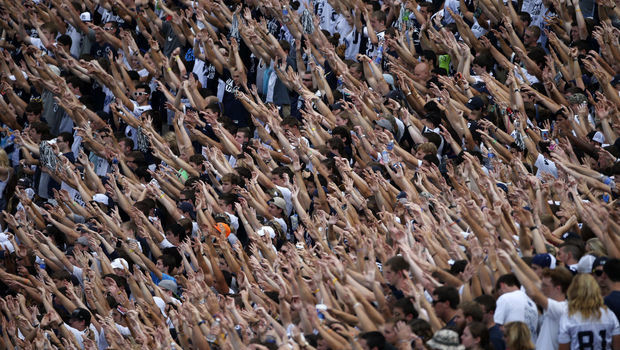 Anyone who questioned the intensity of Nittany Nation and its reaction to the Jerry Sandusky scandal need only to have been on the lawn at Old Main in State College on Monday when the NCAA lifted sanctions against the football program.

Thousands of Penn State students converged to celebrate the football team’s newfound bowl eligibility and the return of its scholarships.

For more than four hours Monday night, fans celebrated as if the Nittany Lions had just knocked off the top-ranked team in the nation.

Chants of “We are … Penn State” rang out in the night sky, songs like “Sweet Caroline” and “Zombie Nation” were staples for the duration, and cries of “Joe Paterno” and “Where’s the statue?” were frequently hit upon.

It was a relatively calm night, considering the size of the crowd. One fan attempted to scale a street light outside Beaver Stadium but was politely chided by a police officer and instantly climbed down. Another reporter saw the crowd disperse for a trapped taxi cab.

At least two players briefly joined in the celebration at Beaver Stadium before thinking better of it once TV cameras showed up. During the downtown celebration, some fans crowd-surfed on mattresses while many just stood around to take photos or take part in the chants.

The crowd gradually dissipated as the night wore on, and most left around 12:30 a.m. ET Tuesday. The NCAA’s announcement was made around 2:30 p.m. Monday.

The NCAA agreed Monday afternoon to again reduce sanctions stemming from the Jerry Sandusky child sex abuse scandal, making Penn State eligible for the postseason this year and restoring all the Nittany Lions’ scholarships next year.

Minutes after the report was announced, the NCAA said it would follow both recommendations immediately. The reduction comes one season after the NCAA scaled back the scholarships penalty following a glowing review by Mitchell in his first annual report. Originally, Penn State would have been able to field only 65 scholarship players this season; now that number is at 75.