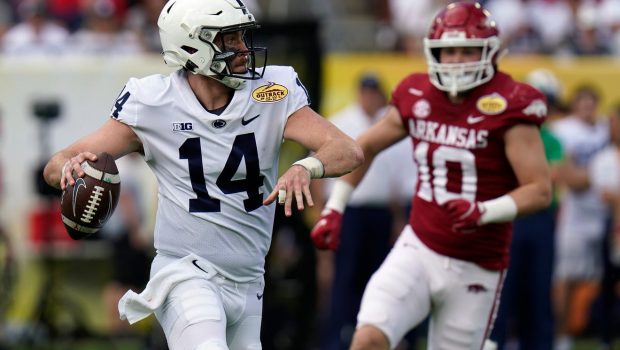 The Penn State season ended yesterday with a 24-10 loss to Arkansas in the Outback Bowl.

And for Nit-heads, this game was a lot like the season.

A 5-0 start and No. 4 in the country ends at 7-6 with so many questions about the future that you can’t fathom them all.

Let’s be fair before we lay the wood:

Penn State missed Jahan Dotson and Jaquan Brisker and five other starters who opted out for the NFL or whatever.

But let’s get real.

Penn State is tied at coach James Franklin for 10 years at a ridiculous salary.

He has proven again and again that he is a limited game-day coach, and now he is due $7 million each year until 2031.

Loyalty because he is coming back for his sixth season?

They Nittany Lions have gone just 11-11 over the past two seasons.

Not exactly the desired position when looking ahead to one of the nation’s toughest opening schedules in 2022.

Penn State’s offense seems no better off with coordinator Mike Yurcich, then it did with Kirk Ciarrocca, then it did at the end led by Ricky Rahne.

In some ways, it looks worse.

The quarterback position should be enviable with a tough-minded, four-year starter returning to lead impressive underclassmen. But you must wonder how a healthy Sean Clifford can be better next fall than a healthy Clifford was against Arkansas?

An underwhelming offensive line must suddenly improve after never really doing so under Franklin.

Yet one more impressive running back recruit like Nick Singleton will be expected to lift up a running game that no one could save now.

And, for better or worse, this just feels different now under Franklin. Maybe because there always seemed to be reasons for struggles and also improvement at the end of past seasons.

More than anything, the talk over the next six months will be about whether a top quarterback recruit like Drew Allar should replace a 24-year-old Clifford next season. And why Franklin can never develop a really good offensive line after eight years. And how could not even one of those national running back recruits could ever gain 100 yards in just one game.

Those kind of issues, even just being on the table now, is strange and a bit bewildering and certainly not tasteful for a fan base wondering why Franklin is getting another big-money contract and enviable security.