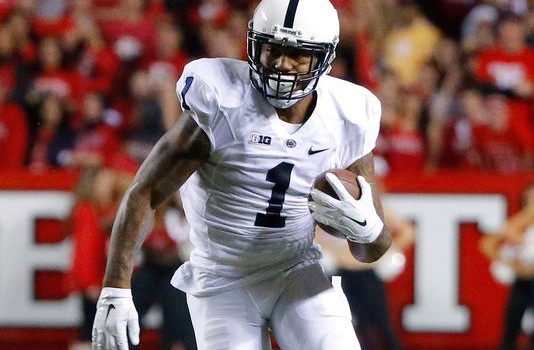 PENN STATE ENDS LOSING STREAK AT INDIANA 13-7; TEMPLE NEXT UP

Penn State’s long football nightmare is over at four straight losses, and the Nittany Lions’ hope for a postseason bowl lives on.

Which makes next week’s home game with Temple that much more important.

Sam Ficken kicked a go-ahead field goal in the third quarter and Bill Belton (photo above) scored on a 92-yard run to give Penn State a 13-7 win at Indiana.

The Nittany Lions (2-4 Big Ten, 5-4) ended their four-game losing streak, their longest in 10 years, despite another poor performance by the offense. They gained a sense of revenge for a 44-24 loss last year to the Hoosiers (0-5, 3-6)

Linebacker Nyeem Wartman helped seal it by intercepting Zander Diamont’s pass and returning it to the Indiana 24 with 2:26 left.

Penn State held Tevin Coleman, the nation’s leading rusher, to a season-low 74 yards on 20 carries. Coleman had been averaging 162.5 yards per game.

The Nittany Lions had 221 total yards, nearly half coming on Belton’s run. Hackenberg completed 7-of-17 passes for 111 yards.