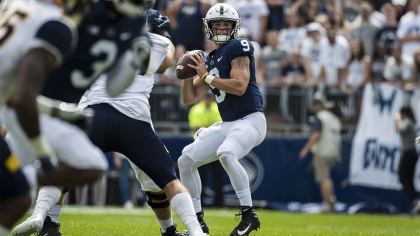 Trace McSorley broke Penn State’s record for most rushing scores by a quarterback as the No. 11 Nittany Lions routed visiting Kent State 63-10.

Heisman Trophy hopeful completed 11 of 22 passes for 229 yards with an interception and ran for three touchdowns for the Nittany Lions (3-0), who led 28-10 at halftime. McSorley surpassed Daryll Clark’s 22 rushing scores and leads the program with 24.

DeAndre Thompkins (above) caught four passes for 101 yards and hauled in 40-yard touchdown pass to begin the rout for Penn State. Miles Sanders rushed for 86 yards on 14 carries while McSorley scored on runs of one, two and 13 yards. McSorley threw a 41-yard touchdown pass to Brandon Polk with 2:37 to play in the third quarter before yielding his spot to backup Sean Clifford.

Woody Barrett completed 20 of 38 passes with 176 yards and threw a touchdown pass to Mike Carrigan for the Golden Flashes (1-2). Matthew Trickett added a field goal.