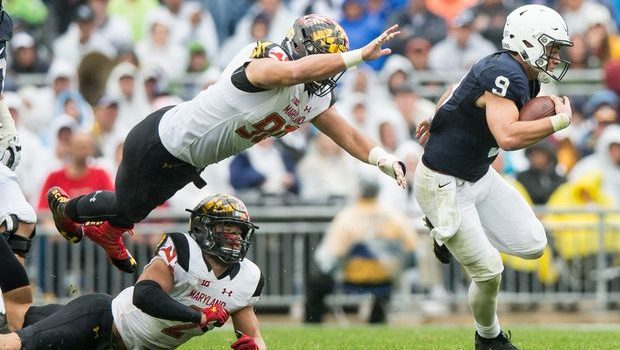 Penn State capped a 10-2 regular season, blowing away Maryland 66-3 in a game that wasn’t even that close.

Penn State has won 10 regular-season games in back-to-back years for just the second time since joining the Big Ten. And yet, particularly after beating Maryland by 63 points, the inescapable feeling about this season (at least from many fans’ views) is that of inevitable longing.

“That’s the tough thing,” quarterback Trace McSorley said. “It’s 10-2, but it’s almost a bittersweet 10-2, because you know it could have been better and we wish it had been.”

Then McSorley, the first Penn State quarterback with multiple 3,000-yard passing seasons, reached for the upside of this season. The Lions might be a handful of plays from returning to the Big Ten title game and, perhaps, competing in the College Football Playoff.

But they’re also a fair distance past the brooding, grueling sanction years in which the future seemed so far.

Penn State beat Pitt by 19 points, gave up three late touchdowns to Nebraska and gave Saquon Barkley enough room to run for only 35 yards against Rutgers.

The Nits trailed for fewer than 38 of the 720 minutes they played this season. But in those minutes, they lost leads of 18, 15 and 11 points to Ohio State, then fell to Michigan State in what Franklin called the literal “perfect storm.”

It took career performances by Ohio State quarterback J.T. Barrett (who threw four interceptions the following week) and Michigan State quarterback Brian Lewerke (who went 2-for-14 in dismal conditions against Maryland) to beat Penn State by a combined total of four points.

“I think people fail to realize how big that is,” Barkley said of consecutive 10-win seasons, and he’s right.

As an arc on its progression, this season marked a significant step for Penn State. Last year was an encapsulated piece of magic, something to marvel at but very difficult to repeat.

This year always was going to have more friction. Penn State had to deal with defensive coordinators over-scouting its offense, a schedule that concentrated its most difficult conference games on the road in a five-game stretch and a fan base that wanted it all.

That’s a lot of freight to shoulder. Yet Penn State still sits a handful of plays from carrying it to the playoffs.

Following Saturday’s win, Franklin said his team’s climb would slow from here. It might be easier to go from seven wins to 10 than from 10 wins to 12. The margins get more narrow. Places like East Lansing always wait.

That’s why, asked the “What might have been?” question, Franklin dismissed it. No “coulda, woulda, shouldas” for him. It was time to celebrate.

“I do not want to become the old crotchety, miserable coach,” Franklin said. “And I do not want my staff to be the same way.”