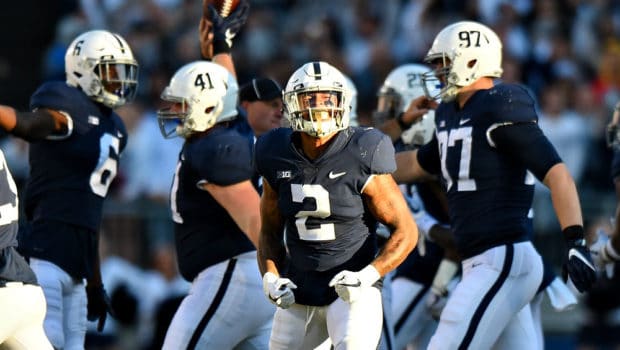 “We’re going to become more of a hard-nosed team up front on both sides of the ball,” Penn State coach James Franklin said after his team’s 27-24 loss to Michigan State on Saturday. “We’re going to be more physical up front. We’re not right now. We’re too finesse.”

The Nits have three games remaining — Rutgers, Nebraska, Maryland — that could lift them to a 10-2 finish and a New Year’s Six bowl game.

But winning Big Ten road games is difficult (ask Ohio State about its 31-point loss at Iowa on Saturday). Winning true road games against ranked teams is even more difficult; Franklin is 0-5 in that attempt at Penn State.

In the past two weeks, Penn State has lost road games to teams with assertive run defenses, cocooned pass protection and quarterbacks who played beyond reason.

The Nittany Lions led one of those games for 58 minutes before falling to a quarterback who completed 16 consecutive passes (and then threw four interceptions against Iowa). They lost the other — derailed by rain and a 3-hour, 22-minute weather delay — on a last-second 34-yard field goal by a kicker who missed a 32-yarder in the fourth quarter of a triple-overtime loss to Northwestern the week prior.

Before Michigan State kicker Matt Coghlin made the winning field goal Saturday, his coach gave him a prayer card. That card, coach Mark Dantonio said, included a phrase from Psalm 91: “You will tread on the lion and the cobra; you will trample the great lion…”

Which brings us back to Franklin’s “finesse” problem. Penn State’s offensive-line concerns — its physicality, health, depth, cohesion and just plain orneriness — have been ongoing through Franklin’s four seasons.

Penn State schemed around it well enough last year, with coordinator Joe Moorhead’s offense getting its playmakers downfield and into favorable situations, leading to space for Saquon Barkley. Opposing defenses are hitting that pitch this year, leaving Barkley to run into walls or block patiently in protection.

Franklin noted his line’s weaknesses earlier this season, suggesting it had to play with more of a “nasty streak.” The problem, the coach said Saturday, isn’t Barkley.

“Saquon didn’t struggle today,” Franklin said of his back, who rushed for 63 yards on 14 carries. “Our offense struggled at times today. We haven’t been running the ball consistently this year. It’s not a Saquon issue. It’s a team issue.”

Ohio State and Michigan State won the lines of scrimmage against Penn State. As a result, they won the games.