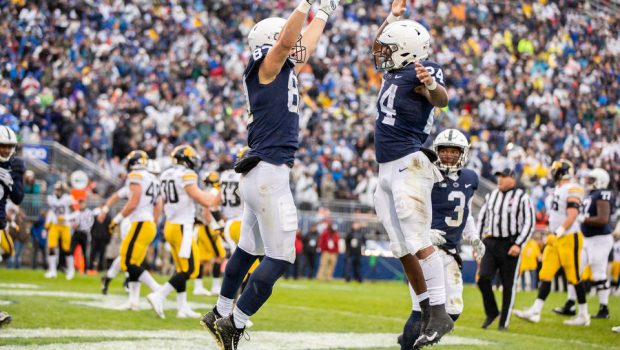 PENN STATE BOWLING FOR A 10 IN TODAY’S CITRUS!

If Penn State beats Kentucky today in the Citrus Bowl, that will give the Nits 10 wins.

Which by any definition is a successful season.

Penn State is looking to wind up with at least 10 wins in three consecutive seasons for the first time since 1980-82.

Kentucky hasn’t done it in 41 years — and just twice in school history.

“Playing Penn State and competing against Penn State, playing on New Year’s Day, getting a 10th victory — it’s very important,” Wildcats coach Mark Stoops said. “It hasn’t happened very many times in the history of our program. So to get 10, hit that milestone, in another motivating factor.”

Stoops is completing his sixth season at Kentucky and has the Wildcats on the rise. The team’s 5-3 record in SEC play was the school’s first winning league mark since 1977, when Kentucky finished 10-1 overall.

“I think it’s a benchmark. You probably have two different benchmarks for programs across the country. Some programs are benchmarked on going to bowl games, and that’s kind of the first level. And, then I think the next level is 10-win seasons,” Franklin said.

“We have been fortunate the last two years to be able to get 10 or more wins. We got a chance to do that for the third time in a row. That’s never happened at Penn State since joining the Big Ten,” Franklin added. “And I think at s place like Penn State, when you start making comments about things that have never happened in our history … it’s special.”

Some things to know about the Nittany Lions and Wildcats from the Associated Press:

HUNGRY CATS: Kentucky seeks its first bowl win in three consecutive trips under Stoops. The New Year’s Day appearance is the Wildcats’ first in two decades. The Wildcats play multiple defensive fronts out of a 3-4 set that has allowed players such as linebacker Josh Allen to thrive.

HIGHLY DECORATED: Allen collected a bunch of awards this month, from Associated Press SEC Defensive Player of the Year to being a consensus first team All-American to winning the Chuck Bednarik and Bronco Nagurski trophies as the nation’s top defensive player. He enters the game with school records of 28.5 career sacks, including 14 this season.

SNELL ON THE CUSP: Junior running back Benny Snell Jr. enters his final game with Kentucky needing 107 yards rushing to break Sonny Collins’ career record of 3,835 from 1972-75. Another 100-yard effort would give the second team All-American 19 total and supplant Collins in that category before departing for the NFL draft.