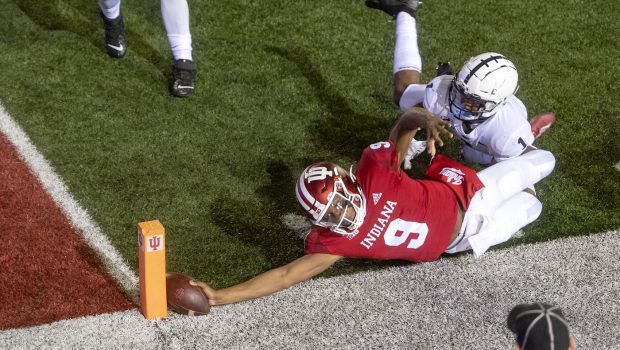 Penn State’s game with Indiana was decided on an two-point conversion in overtime that easily could have been overturned.

Both teams scored touchdowns in overtime, but Indiana decided to go for two. Indiana quarterback Michael Penix Jr. dove for the pylon on the conversion and the ball appeared to hit the ground just inches away from the goal line. The play was ruled a score on the field, and it stood after a review that lasted nearly four minutes.

It was a stunning 36-35 overtime win for Indiana, which had lost 42 straight games to top-10 foes, the longest streak ever in the Big Ten and second-longest active streak in the nation behind Wake Forest. They hadn’t beaten a top-10 teams since beating No. 9 Ohio State in 1987, and it was their first win in Bloomington over a top-10 team since beating No. 3 Purdue in 1967, Indiana’s lone Rose Bowl season.

The ending of Saturday’s game with Penn State was crazy.

The Nittany Lions trailed most of the game and erased a double-digit lead late. Clifford scored on a 35-yard touchdown run on the final play of the third quarter, and then struck late to take the lead.

Indiana went four-and-out on its next possession, unable to block Shaka Toney, who had sacks on the first two plays and rushed throws from Indiana quarterback Michael Penix Jr. on the next two.

Indiana let Devyn Ford score on a 14-yard run with 1:42 left in an attempt to get one last possession, and marched right down the field, going 75 yards and scoring on a Penix quarterback sneak with 22 seconds to go. Penix then ran it in on the two-point conversion to tie the game at 28.

Clifford led Penn State to a score on the first possession of overtime, finding freshman Parker Washington on a 9-yard score. Indiana answered with a great pass from Penix to Whop Philyor in the right corner of the end zone, and Indiana coach Tom Allen chose to end it right there.

Penix, a long jumper in high school and a multi-sport athlete, rolled left on the two-point conversion and dove for the pylon from 5 yards out. His outstretched hand made it just far enough to count as the decisive score.

Indiana led most of the day, taking advantage of three first-half turnovers to take control of the game. Penn State, which had scored first on 13-play, 64-yard drive that took more than 7 minutes, struggled from there.

Veteran quarterback Clifford threw two interceptions, one to Jaylin Williams and another to Jamar Johnson. Johnson also forced a fumble. The turnovers were uncharacteristic for the Nittany Lions, who had only 14 turnovers a year ago.

Indiana took advantage of the short fields to score three times in the second quarter. They got a Charles Campbell 34-yard field goal to make it 7-3 and then junior running back Stevie Scott, who passed 2,000 career rushing yards in the first half, scored on touchdown runs of 14 yards and 2 yards.

Indiana had a 10-point lead at the break despite the fact that Penix completed just 5 of 10 passes for 45 yards in the half. They also got a break on the final play of the half, where Scott fumbled and, after review, the ball was awarded to Penn State with one second left. But kicker Jake Pinegar banged a 25-yard field goal attempt off the left upright.

Penn State had back-to-back long drives but penalties forced them to try a long field goal on the first drive, which Pinegar missed from 48 yards. Clifford, who beat Indiana last year with several big runs in the fourth quarter, ran for 35 yards to make it 17-14.

Penix started to feel it early in the fourth quarter, finding Miles Marshall three times for first downs. The last reception, a 16-yarder over the middle, ended with a fumble, but it was overturned because of a targeting penalty on Jesse Luketa. Indiana retained possession and Luketa was ejected.

Penn State has dominated this series through the years, winning 22 of 23 games prior to Saturday, with the only loss coming in Bloomington in 2013. 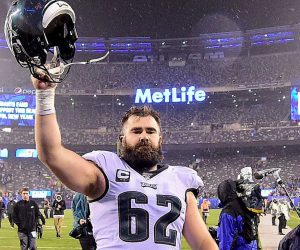 EAGLES JASON KELCE SHOULD RUN FOR MAYOR: WE’D ENDORSE HIM!