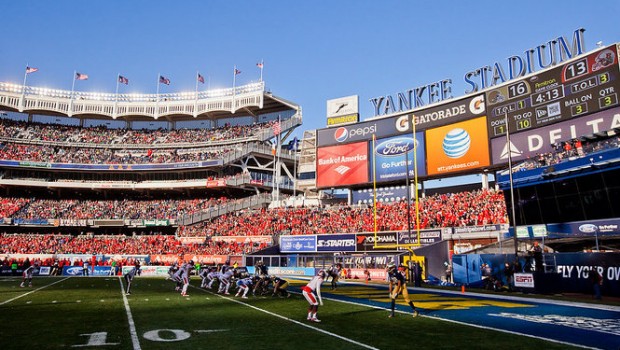 There is nothing like the tradition of a postseason bowl game to excite the masses.

And tomorrow’s Pinstripe Bowl, a battle between two mediocre teams on a baseball diamond that dates all the way back to 2010, has no tradition.

Neither Penn State nor Boston College is ranked.

But it has excited the masses to come to Yankee Stadium in the Bronx.

Take the rabid fans of Penn State, who boast the nation’s largest alumni organization and have seen their team banned from bowl play since the Jerry Sandusky scandal, and stuff them into a smallish made-for-baseball venue and you end up with one of the hottest bowl tickets in the land.

The Orange Bowl might have No.7 Mississippi State and No.12 Georgia Tech, but organizers can only wish they could sell tickets for $148 a pop. That’s the average price of a ticket for Saturday’s clash between the 7-5 Boston College Eagles and the freshly back-from-suspension Penn State Nittany Lions at 6-6.

“This year’s Pinstripe Bowl is far and away the most expensive matchup between two unranked teams in terms of average ticket resale prices,” said Will Flaherty, spokesman for SeatGeek, a national ticket resale business. “By every measure we’ve seen, it’s a pretty hot ticket,”

According to SeatGeek, a Pinstripe Bowl ticket is the fifth-most expensive seat this 39-bowl season, surpassed only by the Sugar, Rose, Cotton and Peach bowls — all of which are part of the new College Football Playoff system that will decide the national championship.

Pinstripe tickets — down about $30 from last year’s game between Rutgers and Notre Dame — actually cost more than tickets for two bowl games in the NCAA playoff system. Fiesta Bowl tickets are going for an average of $142, and a ticket to the Orange Bowl can be had for $80.

Certainly Yankee Stadium has something to do that with. Unlike other games with football stadium capacities of as much as 100,000, Yankee Stadium tops out at a little more than 50,000.

It’s also Penn State’s first bowl game since after the 2011 season, before it was hit in 2012 by NCAA sanctions that included a bowl ban in the wake of the Sandusky child sexual assault scandal. The bowl drought was expected to last for four years, but citing “significant progress toward ensuring its athletics department functions with integrity,” the NCAA in September lifted the ban two years early.

Penn State must donate to charity its roughly $3.25 million share of bowl revenue, but that doesn’t matter to alumni who thought they’d have to wait until at least 2016 to see their team in a bowl.

Fans watching the glut of televised games will likely notice some interesting camera angles designed to hide large sections of empty seats at many of the bowl games featuring unranked teams. The camera operators at Yankee Stadium won’t need to be nearly so creative.