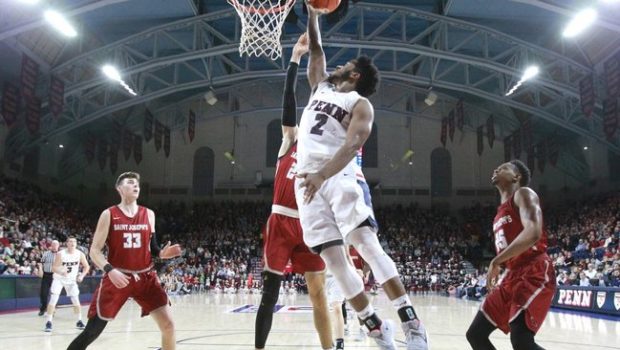 AJ Brodeur scored 13 points and grabbed 11 rebounds as Penn held off Saint Joseph’s 67-56 at the Palestra.

Caleb Wood scored 12 points, Antonio Woods (above) 11 and Ryan Betley 10 as the Quakers (12-6) have won four of their last five and rebounded from a loss to Temple in another Big Five game.

Shavar Newkirk led the Hawks (9-11) with 19 points, James Demery and Chris Clover each scored 12. Eight of Clover’s total came after halftime, including back-to-back layups propelling Saint Joseph’s to a 37-35 lead.

But Woods hit a 3 as Penn responded with a quick 9-0 run. The Hawks came as close as four points twice.