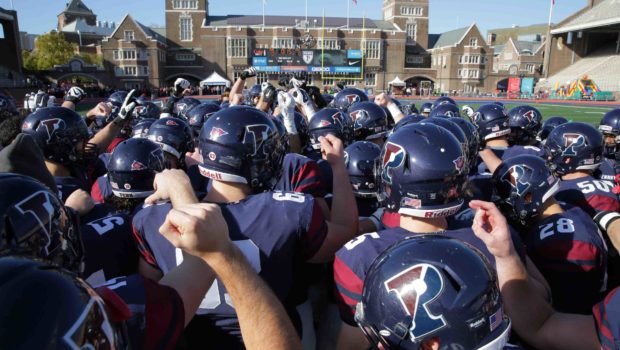 Harvard and Princeton are the favorites to rule Ivy League football this fall.

But don’t count out Penn!

“In all honesty, I thought Penn should have gotten the vote,” 24-year Harvard coach Tim Murphy of the Quakers, who shared the Ivy crown with Princeton a year ago, said Monday. “The way we finished last season . . . but it is something we are used to [the Crimson have been picked No. 1 in seven of the past 10 years]. Polls do motivate you.”

A promising 2016 season ended quietly with back-to-back losses to Penn and Yale. The competition for the starting quarterback position at Harvard will start on the first day of camp Monday. And whoever steps in behind center — either fifth-year senior Joe Viviano or junior Tom Stewart — will do so minus a two-time all-Ivy right guard as well as an athletic force at left tackle who is now in camp with the Patriots.

Princeton, which will be without reigning league Offensive Player of the Year John Lovett (offseason surgery) short-term, and Harvard each received 120 points in the league’s preseason media poll, followed by Penn (110). Yale was fourth, followed by Dartmouth.

As Murphy pointed out in Monday’s league conference call, it all starts at quarterback.

The 6-foot-5-inch Viviano started nine games a year ago, throwing 15 touchdown passes and rushing for five more, but as a fifth-year player (he sat out 2015 with a broken foot), he was not eligible for spring ball.

Stewart (30 of 51 passing a year ago) stepped forward with an outstanding spring, according to Murphy, who expects to name his starter within 10 days of the opener Sept. 16 at Rhode Island. Preseason All-American Justice Shelton-Moseley and Adam Scott are top targets.

Up front, Larry Allen Jr. — the son of the Pro Football Hall of Famer — is not enrolled at Harvard this year, though Murphy expects the NFL prospect to return for his senior season next fall. And tackle Max Rich is trying to make an impressive on the folks in Foxborough.

But Murphy touted the potential of his entire line group, led by junior tackle Tim O’Brien and junior center Ben Shoults. Captain Luke Hutton, a senior linebacker, and junior end D.J. Bailey (No. 99 in your program) anchor the defense.