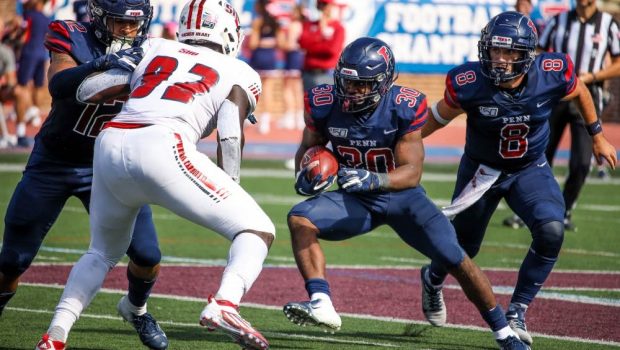 Brooks scored twice in the first quarter — each from 1-yard out — ending drives of 75 and 35 yards, respectively. With 1:48 before halftime, Nick Robinson threw a 17-yard TD pass to Brooks to finish another 75-yard scoring drive for a 24-3 lead.

Sacred Heart reached the end zone on its ensuing drive when Logan Marchi threw a 29-yard TD pass to Naseim Brantley to reduce the Pioneers’ deficit to 24-10.

In the third quarter, Kevin Peprah recovered a Penn (2-2) fumble and returned it 12 yards for a touchdown to make it a one-score game. Two drives later, early in the fourth, Robinson threw an 11-yard TD pass to Rory Starkey Jr., and Penn led 31-17.

On the ensuing drive, Marchi connected with Tyrese Chambers on a 74-yard scoring pass reducing the Pioneers (3-3) margin to one score. Brooks sealed it with a 2-yard scoring run with 6:51 remaining.

Robinson threw for 267 yards with 129 going to Starkey on eight receptions.

Marchi threw for 278 yards with two touchdowns but was intercepted twice.