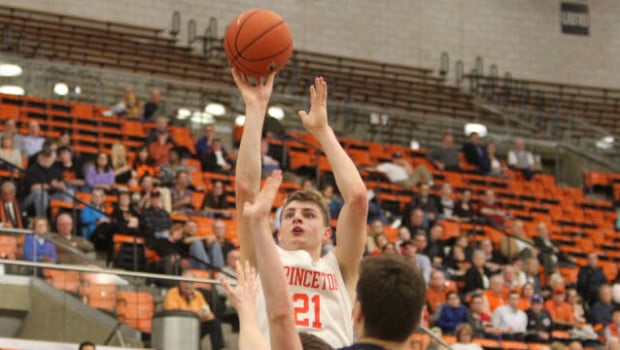 The Penn Quakers made the Princeton Tigers sweat last night but it was too little, too late.

Henry Caruso (above) scored 13 points, Pete Miller had nine points and 10 rebounds and Princeton held off Penn’s second-half rally to beat the Quakers 72-71 to finish the regular season 13-0 at home.

Princeton was up by 18 with 14:52 remaining and seemed on its way to easily stay perfect at home for the first time since the 2010-11 season.

On Penn’s last possession that started with 3.2 seconds left, Jackson Donahue curled around the 3-point arc to get the inbound pass and drove the lane, but his pass inside to Darien Nelson-Henry was intercepted and time ran out.

Devin Cannady and Spencer Weisz each added 11 points for Princeton (22-6, 12-2 Ivy League), which has won eight of the last 10 in the series.