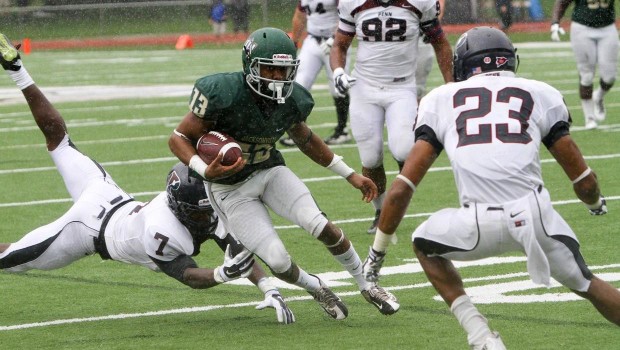 As a metaphor, Penn’s season-opening 34-31 loss yesterday at Jacksonville was a washout.

Jacksonville quarterback Kade Bell led an eight-play, 87-yard touchdown drive in under two minutes — culminated with a 27-yard pass to D’Andre Randle (photo above) with 39 seconds remaining — to stun the Penn, 34-31.

“There were an awful lot of weather elements that we had to overcome today, with the heat, the humidity and the rain, so there’s certainly some positives we can take out, but it’s disappointing that we couldn’t finish the deal,” Penn coach Al Bagnoli told the Daily Pennsylvanian. “We had chances on both sides to put it away, but we just came up short.

The Quakers’ season opener was a wild back-and-forth affair, one that saw sophomore quarterback Alek Torgersen look a lot like his predecessor, Billy Ragone. On Penn’s opening possession, he faked a handoff and scampered six yards for a touchdown, notching his first career rushing score and putting Penn (0-1) up, 7-0.

Torgerson finished with 200 yards on 14-of-33 passing, and he also was the Quakers’ leading rusher, carrying the ball 12 times for 65 yards.

Although Penn’s defense was impressive early, the Dolphins finally started to click. Sophomore running back Ulysses Bryant — who finished with 127 yards after going for 168 yards and two touchdowns against San Diego last weekend — finally got going on the ground, and Bell began finding his receivers downfield.

Bell threw the first of his four touchdown passes to senior wide receiver Andrew Robustelli with 5:43 left in the first half. The Dolphins also tacked on a field goal to head into the locker room only down four.

After Penn stalled on its opening drive to begin the second half, Bell took over again. The Fleming Island, Fla., native found junior wide receiver Andy Jones for a 28-yard score to give Jacksonville its first lead of the day.

“We had trouble generating a pass rush out of a four-man front,” Bagnoli said. “To their credit, they took advantage of it.”

The Quakers looked to be in control of the game heading into the fourth quarter. But as the monsoon-like rain picked up, Torgersen threw an ill-timed interception with the Quakers driving to put the game out of reach.

After the pick and trailing 31-19, Bell found Bryant in the flat for a seven-yard touchdown, cutting the Quakers’ lead to five with 6:18 remaining.

Though Penn was able to run plenty of clock, junior punter Hunter Kelley came on with just over two minutes remaining. Solid in his first action as the Quakers’ go-to punter, Kelley managed to pin the Dolphins at their own 13 with 2:32 to go.

That’s when Bell went to work one final time. Eventually faced with a 4th and 4 at midfield, Bell hooked up with Jones for an eight yard gain.

Bell dropped back and threw a deep ball to Randle in the front left side of the end zone. Penn senior defensive back Evan Jackson dove to try and break the pass up, but Randle maintained concentration and pulled in the game-winning score.

Bryant converted the two-point conversion to give Jacksonville a 34-31 lead with 39 seconds left.