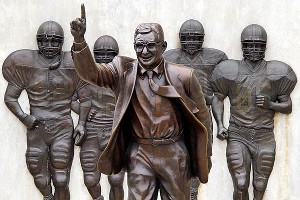 PENDULUM SWINGING BACK TO RESTORATION OF JOE PA STATUE

At today’s Penn State-Rutgers game, many of the nearly 100,000 fans will be wearing khaki pants with the cuffs rolled up, white shirts and thick black glasses in a tribute to late head football coach Joe Paterno.

There will be cardboard Paterno cut-outs and a postgame candlelight vigil on the spot where his statue stood before the university removed it in 2012 amid fallout from an assistant coach’s child sex-abuse scandal.

“We’re not going away,” Laurie Stanell, a 58-year-old dentist from Doylestown, Pa., who graduated from Penn State in 1980 and is behind the sartorial shout-out, told the Wall Street Journal. “We’re just going to keep honoring him and pushing for the university to come back on board.”

Dr. Stanell is part of a steadfast group of alumni, which now includes members of the university’s board of trustees, who are seeking to restore Paterno’s legacy. They are pushing for restoration of the statue and have sued to get details of the source material of a scathing report by former Federal Bureau of Investigation directorLouis Freeh that accused Paterno and three former university administrators of conspiring to conceal the behavior of Jerry Sandusky, a former defensive coordinator.

Paterno was fired days after the Pennsylvania attorney general’s office in November 2011 charged Sandusky with having abused young boys for more than a decade. Paterno died within three months, of lung cancer, at 85.

Sandusky, who is 71 and maintains his innocence, was convicted in 2012 of abusing 10 young boys over more than a decade and sentenced to 30 to 60 years in prison. The former school administrators, two of whom were originally charged in 2011, are still awaiting trial on charges that include perjury and obstruction. They have all maintained their innocence.

A report released in early 2013 and commissioned by the Paterno family contended that the Freeh report’s findings were factually wrong, speculative and “fundamentally flawed.” That report, by a group including former U.S. Attorney General Dick Thornburgh, concluded that the “validity and thoroughness of the Freeh report was oversold to the public.” This past April, a group of alumni-backed trustees sued Penn State to gain access to the documents and interviews that Freeh used in his report.

“We have never feared the truth,” said Jay Paterno, one of Mr. Paterno’s sons, who supports the lawsuit. Penn State opposes the request by the group of trustees.

Separately, university President Eric Barron has said the school eventually will honor Paterno, who was head coach from 1966 through 2011. Earlier this year, Barron also criticized the Freeh report, saying it painted in inaccurate picture of the university and was “not useful to make decisions.”

Freeh, in an email, stood by his report’s findings.

Some oppose efforts to restore Paterno’s legacy. “You can’t glorify somebody who failed to do everything they could to protect children,” said Jennifer Storm, victim advocate for the state of Pennsylvania.

But early this year, as part of a settlement of a lawsuit brought by two high-ranking state officials, the National Collegiate Athletic Association restored 111 of Mr. Paterno’s wins, making him once again the most winning coach in major-college football with 409 victories. It also rescinded other penalties against the university.

“The pendulum has definitely swung. We want to keep that motion going,” Jay Paterno said.

In State College, a poster in the window of Rapid Transit Sports, an athletic store, calls for Paterno’s statue to be restored. Inside, a stream of customers said they agreed with the sentiment.

“I hope it happens,” said Suz Price, 63, a retired high-school teacher and Penn State season ticket-holder since 1978. “Joe didn’t do anything.”