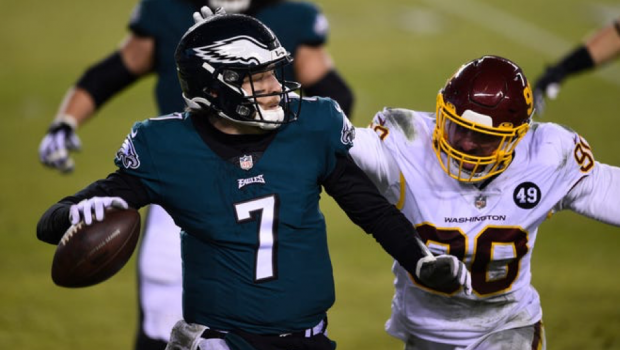 PEDERSON’S TANK COST EAGLES BETTORS, JUST AS THEY HAVE ALL YEAR!

The Eagles season is over, thank God.

And no one is happier than those who bet on them all year.

Lost in the onslaught of reasons to criticize coach Doug Pederson the other night for benching QB Jalen Hurts for scrub QB Nate Sudfeld is that Pederson screwed with the line.

WFT was a 4-point fave against the Eagles and Philly was behind 17-14 when Hurts was yanked,

Sudfeld fumbled his first snap, Chase Young recovered and WFT kicked a field goal to make it 20-14, where it ended.

So once again the Eagles cost bettors their money.

Just as they have all year.

Before the season started, the Eagles had the seventh-best odds to win Super Bowl LV. The over/under win total for the Birds was 9.5.