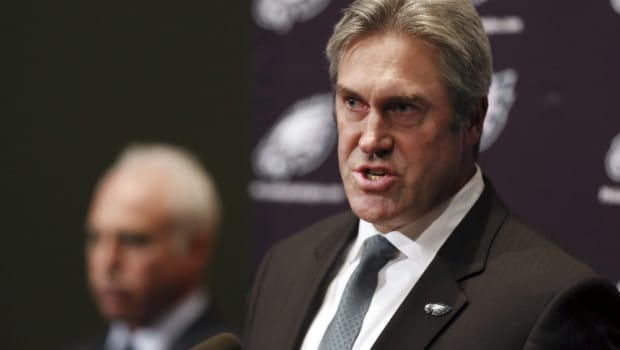 PEDERSON HEDGES HIS BETS AGAIN ON BRADFORD AS EAGLES QB!

New Eagles’ coach Doug Pederson has been sort of wishy-washy on the status of quarterback Sam Bradford and whether or not he’ll be back in 2016.

He has wavered from saying complimentary things about Sam to the mushy middle.

Pederson recently sat down with 6ABC’s Jeff Skversky for an interesting interview. Here’s what Pederson had to say.

Where do things stand right now?

Right now, Sam Bradford is here. We know he’s a free agent. And, again, that’s a position I’ve said all along we’re going to evaluate and we have to make the best decision possible for the Philadelphia Eagles. Going forward, if he’s our guy, then he’s our guy, and we make a run with him. If he decides to go elsewhere in free agency, then we’ve got a couple of guys that we can bring in here or use the guys on our roster and make a push that way. So I feel like we’ve got good depth there, and I’m looking forward to working with these guys this spring.

How will things play out?

“It’s hard to say because in this day and age in free agency, you never know what players and agents are thinking, so I leave it up to them. You encourage, as a coach, you’d love to have everybody back. That’s just what you would love to have.

“If he’s here, yeah. If he’s our guy, then he’s our guy, and we go forward with that. But I do know that with this day and age in free agency, and the dollars and sense get a little higher each and every year, you can’t fault a player — being a former player — you can’t fault a player for getting an opportunity to become one of the top paid players in the National Football League and that’s where Sam’s at right now.

Will the Bradford decision come down to money?

“It’s possible. I’m not in those negotiations so I don’t understand. I don’t really know what’s going on and that’s about all I can really say on that. A lot of times in these cases, yeah, it does come down to that.

Does Bradford want to be back?

Yes, he has, he has. And I think he’s excited to be back. And just hoping that things work out and that he’s a part of the Philadelphia Eagles going forward in 2016.

Did Pederson tell Bradford he wants him back?

Yeah, I have. With our conversations and the things we’ve talked about this spring, I’ve told him that he’s very capable of leading this team deep into the post-season.

Is there a franchise QB available in the 2016 NFL Draft?

I think there is. The guys that we’ve seen at the Senior Bowl, the guys we’re continuing to evaluate this spring, there’s a couple guys that could come in and potentially start right away. The ideal situation would be to get one of those guys and have them possibly sit for a year or two and learn your system, understand your community, understand your fan base, understand your media before you just throw them out there to the wolves. But that’s the ideal situation. But I do believe there are a player or two in this quarterback draft [class] that could start right away.