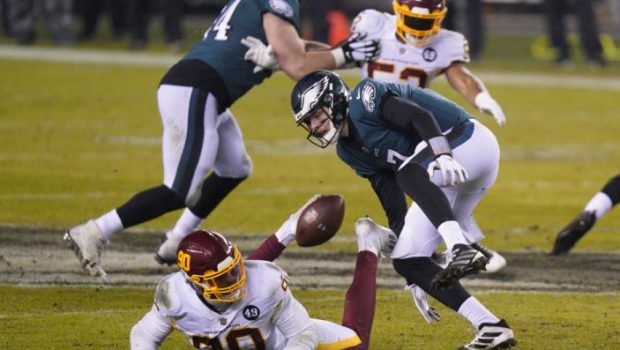 With the Eagles down by 3 points early in the fourth quarter, Eagles coach Doug Pederson benched starting QB Jalen Hurts for scrubeenie Nate Sudfeld, who hadn’t taken a snap since 2018.

He threw an interception and then fumbled a snap which WFT’s Chase Young recovered and Washington soon kicked a field goal to go up 20-14.

“Yes, I was coaching to win,” Pederson said, adding that no one from management directed him to pull Hurts. “That was my decision solely. Nate has obviously been here for four years, and I felt he deserved an opportunity to get some snaps.”

Even NBC commentator Chris Collinsworth called out the Eagles for tanking:

“I personally could not have done what they did.”

Chase Young picks up the loose ball! @WashingtonNFL takes it back.