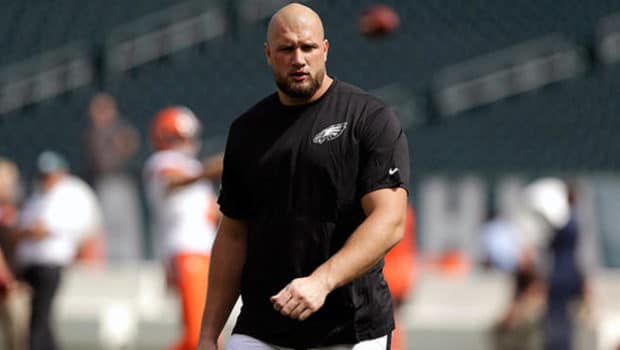 All eyes aren’t on Eagles right tackle Lane Johnson at this week’s OTA.

But there is more of him to see!

“I just trained by myself back in Oklahoma,” Johnson said Tuesday. “Trained by myself and everything went good. I came back, my body weight is about 325, so I’m heavier than I’ve ever been. I feel in good shape, and I have a lot to prove, so it’s a big year for me.

“I did everything by myself. There wasn’t going to be any mishaps.”

Johnson tested positive for PEDs before the season last year after taking a banned substance known as peptides and was eventually slapped with the full 10-game penalty after a lengthy appeal process.

“I feel like whenever I’m playing, I try to be the best right tackle in the NFL,” Johnson said. “My deal is to just stay on the field, play a complete season, and I think it will be a big year for me.”

“I’ve always been the athlete that I am,” Johnson said. “That’s what I’ll continue to prove. I’m gonna go play and show people what I can do.”

“My big deal is cutting out the ice cream, the Ben & Jerry’s late at night — the stuff you want to indulge in,” Johnson said. “If you get me on an ice cream binge, it’s not good.”