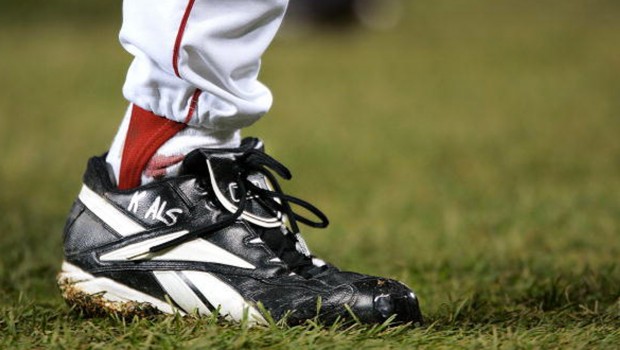 Ex-Phillies pitcher spends most of his time these days commenting on TV and tweeting some of the most bizarre opinions imaginable.

But he was a borderline Hall of Fame pitcher who helped the Phils to the 1993 NL crown and made his legend with his contribution to the 2004 Boston Red Sox’ REVERSE THE CURSE OF THE BAMBINO World Series title.

Still, his bloody sock from that effort has been auctioned for:

In Game 6 of the 2004 ALCS, Schilling pitched seven innings and gave up just one run as the Red Sox pulled even with the dreaded Yankees and went on to win the series after trailing three games to none. Schilling, prior to the game had gotten an injection to mitigate his lingering ankle injury, and the result was that, while he was able to pitch, he did so in a sock soaked in blood. He repeated the feat in Game 2 of the World Series.

Schilling had originally loaned the World Series sock (the ALCS sock was discarded) to the Baseball Hall of Fame, but he could hold out on capitalizing on the sock’s fame for only so long. When his video game company 38 Studios went bankrupt, the sock went up for auction with a starting bid of $25,000. Some thought the auction would break six figures, but the winning (anonymous) bidder only had to shell out just over 92 grand. What a deal!