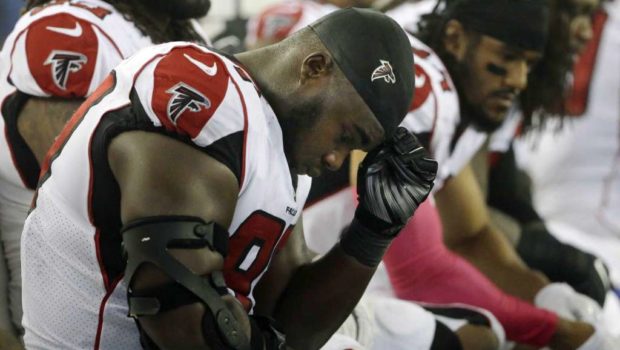 Everything is falling into place for the Eagles.

Even when they are not playing.

By the end of the Patriots’ 23-7 romp, it was clear that the Patriots have straightened out what ailed them earlier this season. And that the Falcons are a shadow of the team that built a 25-point third-quarter lead in that championship game, only to fall apart and lose the first overtime contest in Super Bowl history.

Brady led that historic comeback, and he guided an offense that dominated the clock when the score was relatively close. Plus, unlike in the last meeting, he had a strong defense complementing him. A unit that ranked dead last in the NFL through six weeks nearly pitched a shutout against the league’s No. 5 offense.

“They had some big stops in the red area, the fourth-down plays were huge,” Brady said about the defense. “It was great complementary football and everyone did a great job contributing.”

New England scored the final 31 points to win the NFL championship in February. Placards and shirts reading 28-3 were ever-present in and around Gillette Stadium as the Patriots (5-2) scored the first 23 points in this prime-time mismatch. The Falcons (3-3) were outplayed throughout this one.

“There were plays out there, we didn’t make them,” center Alex Mack said. “If it’s third down, if it’s red zone — all those little things add up. And to play a good team, like the Patriots are, you’ve gotta make them.”

While Atlanta looked tentative, if not intimidated, Brady and his offense surgically tore apart the Falcons, mixing runs and passes. And that defense …

“This was a reminder that when we play the game the right way, we can do good things on defense,” DB Duron Harmon said.

“Every game takes a little different turn and I think we did a great job staying balanced,” Brady added after the Patriots gained 162 yards on the ground and 241 through the air. “It was great to hand it off, see those guys rushing the way they did, and the linemen blocking. It was a great win.”

Brady threw a shovel pass to Brandin Cooks that traveled perhaps a foot, and the receiver used his speed to get into the left corner of the end zone. The other TD was a 2-yarder to James White, who had three touchdowns, including the winner, in the Super Bowl.

It got so bad for Atlanta that the usually reliable Matt Bryant had a field goal blocked and then put a 36-yarder off the left upright. That Super Bowl losers’ malaise folks talk about might have found a home in the ATL this year.

Stephen Gostkowski had no trouble sending field goals of 29, 21 and 38 yards through the fog for New England.

“That fog was pretty crazy,” Rob Gronkowski said. “I mean I have never seen anything like that or played in any fog. A deep ball up in there was definitely tougher than with no fog.”

The Falcons seemed ready to end the string of points allowed to the Patriots at 51 when they got to the 1 early in the fourth period. But Matt Ryan, who struggled all night, was off-target to Julio Jones in the end zone. Then receiverTaylor Gabriel lost 4 yards on a fourth-down run.

Even the fans in the upper deck who could barely see through the haze at that point let out a huge cheer, then Gostkowski added his third field goal to extend New England’s mastery of Atlanta to 54 straight points.

Jones’ 1-yard touchdown reception with 4:09 to go ended the schneid, and he hurled the football high into the mist as if to say “at last.”