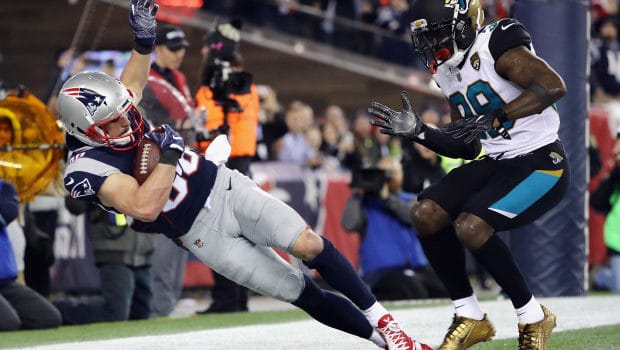 PATS SCRAPE BY TO BEAT JAGS AND FACE HIGH-FLYIN’ EAGLES IN SUPE!

If you’ve been paying attention all these years, you knew there was never any doubt, writes Dan Shaughnessy of the Boston Globe.

Oh, and of course it doesn’t matter if Tom Brady is playing just four days after getting 10 stitches in his throwing hand or if Rob Gronkowski is KO’d by a hit to the helmet in the first half of the conference championship.

No. None of that ever matters. The Patriots win. They always win. And Sunday they earned their 10th trip to the Super Bowl, and the eighth trip in the Bill Belichick/Brady era, with a thoroughly entertaining 24-20 victory over the upstart Jaguars.

No Tomato Cans this time. The worthy Jags played very well for a good portion of this game and their naive fans probably thought they were going to shock the world. We know better. We’ve been watching this for 17 years and there’s always another Brady comeback, another Tuck Rule, replay reversal, or dumb decision by the opposition. When the clock hits 0:00 and the confetti flies, the ever-better-and-smarter-than-you Patriots hoist the championship trophy over their heads while the stunned visitors spit out pieces of their broken luck.

The Patriots will play the Eagles in two weeks in Super Bowl LII in Minneapolis. The Patriots have won two of the last three Super Bowls and copped five Lombardi trophies during the Belichick-Brady era. New England is the first team to appear in 10 Super Bowls and the Patriots can tie Pittsburgh as the winningest Super Bowl franchise with a victory in Minnesota.

There was nothing easy about Sunday afternoon’s rock fight against the Jaguars. Much-mocked Jacksonville quarterback Blake Bortles played the game of his life and the Jaguars’ vaunted defense stuffed the Patriots for three-plus quarters. But Jacksonville started to do stupid things near the end of the first half and spent the final two periods throwing sandbags at Brady in hopes of stalling the inevitable wave that was about to crash over the heads of the visitors. Brady connected with Danny Amendola for a pair of touchdown passes in the final 8:44 and it unofficially ended when defensive back Stephon Gilmore batted away a Bortles desperation fourth-and-15 pass with 1:53 left: