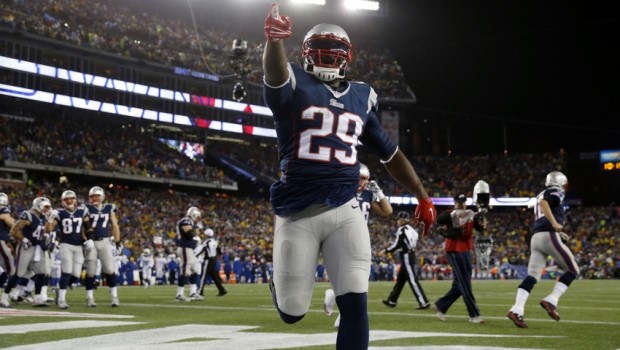 Not for nothing is New England Patriots’ coach Bill Belichick considered the best coach in the NFL — and maybe the best since Bill Walsh unveiled the West Coast offense with the 49ers’ Joe Montana and Jerry Rice 30 years ago. Belichick (left) is taking another team to the Super Bowl, and he is flexible enough so that this week’s unit doesn’t even resemble the same team that beat the Baltimore Ravens last week.

The Pats pummeled the Indianapolis Colts 45-7 in the AFC title game, and just a week after Tom Brady threw 50 passes to spark the comeback against the Ravens, they pounded the Colts with a running game carried by LeGarrette Blount (photo above).

“We believe in everybody, across the board,” summed up All-Pro cornerback Darrelle Revis, who will cap his first season with the Patriots with the first Super Bowl of his eight-year NFL career. “The coaches do as well. You’ve seen it. When somebody’s number is called, they step up and play.”

Blount logged 30 carries for 148 yards with three touchdowns, a week after New England rushed for a grand total of 14 yards against Baltimore.

The Colts defense is not Baltimore’s. Just like the last time they routed the Colts — during Week 11 when Jonas Gray rushed for 201 yards — the Patriots went heavy with a steady dose of overloaded six-man offensive line formations to steamroll their way to victory.

Sure, Brady’s a constant. He’s just won his record sixth conference title game, and for the seventh time in his career he passed for three TDs in a postseason game — topped only by Montana’s nine.

Yet Blount — who at sometimes rumbled and at other times danced through the Colts to reduce the pressure on Brady — wasn’t even on the team for the Week 11 smashing.

He was with the Pittsburgh Steelers back then, disgruntled by his reduced workload behind Le’Veon Bell. After Blount stormed to the locker room during a game at Tennessee when Bell rushed for 200 yards — defiantly quitting on the team — he was cut.

Belichick re-signed him within days, and Blount got back into the flow with the team that revived his career last year.

What a journey. Look at him now.

“We’re going to the Super Bowl,” said Blount, who rushed for 166 yards and four TDs in the divisional playoff romp over the Colts last year.