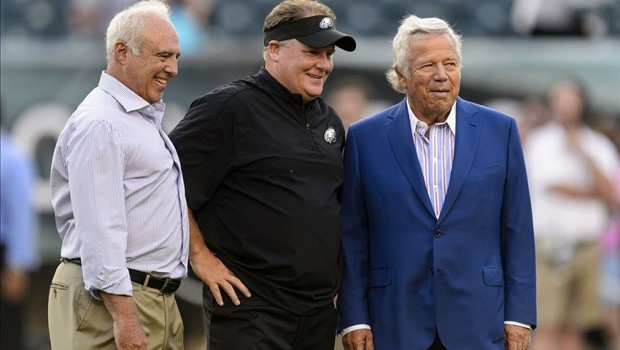 Kraft (right) with Eagles owner Jeffrey Lurie (left), whom he outbid to buy the Pats in 1993, and Birds’ coach Chip Kelly.

There are plenty of subplots in the Deflategate scandal that has become a huge distraction for the Super Bowl-bound New England Patriots.

But Patriots owner Robert Kraft has already shown a lack of patience with previous controversies, which makes his reaction to the latest one worth watching.

As pointed out by Tom Curran of CSNNE.com, Kraft took a dim view of coach Bill Belichick’s response when he confronted him about Spygate charges in 2007.

“How much did this help us on a scale of 1 to 100?” Kraft reportedly asked Belichick, via Gary Myers’ book Coaching Confidential.

Kraft then had to stand up at the owners meetings the following spring and apologize to his 31 business partners and the league, for the lack of institutional control that created the mess.

And whether the inflation of the ball had a tangible effect on the outcome of the game or not, the image of impropriety might be as important to the league. And given Kraft’s loyalty to commissioner Roger Goodell, it’s worth monitoring the stance he takes on this situation as well.