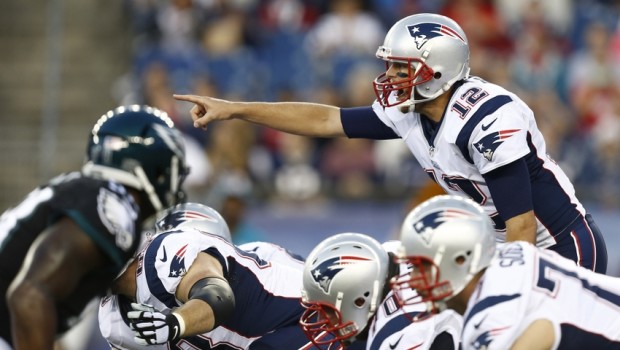 PATRIOTS (WHO ELSE!), CARDS CO-FAVES TO WIN SUPER BOWL 50

And, the New England Patriots enter the playoffs as Super Bowl favorites. The Patriots are not alone at the top, as they’re joined by the Arizona Cardinals, at least according to the odds posted over at Vegas Insider.

And the two wild-card teams with the best odds are the respective No. 6 seeds in each conference: the Seahawks and the Steelers.

T-1. Patriots (9-2; Previously 5-2): Bill Belichick’s squad has a week to get everyone (Julian Edelman, Danny Amendola, the entire offensive line, and more) healthy before a divisional round matchup with the highest-seeded winner of this weekend’s Texans-Chiefs andBengals-Steelers games. New England stumbled down the stretch of the season, but we know better than to count out Touchdown Tom.

T-1. Cardinals (9-2; Previously 5-1): The high-powered Cardinals face off with the lowest-seedeed winner of the Vikings-Seahawks and Washington-Packers games taking place this Sunday. Arizona looked incredibly strong down the stretch of the season before getting blown off the field by the Seahawks last week.

3. Panthers (5-1; Previously 4-1): The Panthers had the league’s best record and are led by the NFL’s probable MVP and Coach of the Year in Cam Newton and Ron Rivera. They await the lowest-seeded winner of the NFC matchups this weekend and have home field throughout the NFC playoffs.

4. Broncos (6-1; Previously 6-1): Denver will have Peyton Manning under center for its divisional round showdown with the lowest-seeded winner of this week’s AFC games. Its postseason fate likely rests squarely on Manning’s right shoulder. If he plays like the Manning we know, they have as good a shot as anybody. If not, well, it could be a short postseason run.

4. Seahawks (6-1; Previously 8-1): One of the NFL’s best home teams (before this year) will have to win three straight on the road to even get to the Super Bowl. Russell Wilson has been on fire lately and the Seahawks are likely getting Beast Mode back on the field for the wild-card round. If they can beat Minnesota, Seattle would head to Carolina for the divisional game.

6. Steelers (7-1; Previously 12-1): Pittsburgh got some help from the Bills to secure its playoff spot. They have a divisional date with the rival Bengals on tap for the opening weekend of the playoffs, and would head to Denver if they win that one. With an offense as tough to stop as any in all of football, it might not matter much that they’d have to win three road contests to make it to Santa Clara.

7. Chiefs (24-1; Previously 30-1): The NFL’s hottest team that nobody believes in, the Chiefs have won 10 straight after starting the season 1-5. They get Justin Houston back for their opening round matchup with the Texans, and if they win, they’d face either the Broncos or Patriots, depending on the Bengals-Steelers result.

8. Bengals (25-1; Previously 8-1): Cincinnati will not have quarterback Andy Dalton for Saturday’s wild-card game against the Steelers. AJ McCarron will take the snaps instead, and he’ll have to try to match Big Ben shot for shot. If the Bengals manage to come away with a win, they’d head to New England to take on the Patriots in round two.

9. Packers (35-1; Previously 8-1): Green Bay’s offense has not looked right all year. The Packers’ defense will likely be down a No. 1 cornerback (Sam Shields is doubtful with a concussion) against a passing offense that has been incredibly tough to stop in its home stadium. But the Pack do have Aaron Rodgers. If he can outduel Kirk Cousins on Sunday, the Pack will either head to Carolina or Arizona, depending who wins the Vikings-Seahawks matchup.

9. Vikings (35-1; Previously 25-1): Minnesota’s rewad for topping the Packers in the NFC North? A date with the NFC’s hottest team, one that topped Football Outsiders’ DVOA (Defense-adjusted Value Over Average, which adjusts performance for down, distance, and opponent) rankings for the fourth consecutive season. If the Vikes can top Seattle on what’s supposed to be a frigid day, they’ll take on the Cardinals in the divisional round.

11. Washington (38-1; Previously 100-1): The NFC East champs do not have a whole lot of believers. They haven’t beaten a team with a winning record all season (they went 0-3 with an average point differential of -19.7 agains teams that finished the year above .500), but there might not be a quarterback playing better than Captain Kirk right now. And Washington has been excellent at home. Knocking off the Packers would send Washington to either Carolina or Arizona, depending on the Seahawks-Vikings result.

12. Texans (75-1; Previously 60-1): Houston won the AFC South and for its troubles gets to square off with the Chiefs, who haven’t lost since Week 6. J.J. Watt and company could cause some problems for Alex Smith and the Kansas City running game, but whether the Texans get to move on and play either Denver or New England could depend on how their offense deals with the returning Justin Houston and the K.C. pass rush.