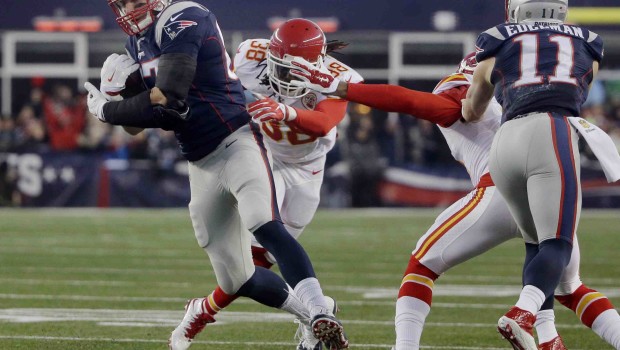 Tom Brady can be selective in taking shots on deeper routes, especially to tight end Rob Gronkowski (above), one of the toughest covers in the entire NFL.

The England Patriots beat the Kansas City Chiefs yesterday, which was expected.

But was not expected was the way they did it.

In a 27-20 victory that propelled the Patriots to their 10th AFC Championship game in the 15 years with Bill Belichick and quarterback Tom Brady, New England showed that it can compete for Super Bowls while remaining one-dimensional.

The Patriots can rely on their passing game.

“It’s pretty cool, man,” Brady said of reaching another AFC title game. “It’s hard to do. You’ve got to grind throughout the entire year. There are only four teams playing next week, and we’re one of them. And that game means a lot, so we’ve got to try to get as healthy as we can and see if we can put together our best game of the year.”

Brady completed 28-of-42 passes for 302 yards and two touchdowns.

The Patriots recorded 14 rushing attempts in the game. Three of those were kneel downs to end the first and second halves. Two more were scrambles by Brady. One other was a quarterback sneak for a touchdown from the Chiefs’ one-yard line.

That means the Patriots called 12 designed rushing plays in a game that they dominated.

Not coincidentally, New England’s aerial assault of Kansas City came on the same day that receiver Julian Edelman played for the first time since Nov. 15, when he suffered a broken bone in his foot.

“When you get back No. 11, it makes things out there easier,” receiver Keshawn Martin said. “Not just for a couple of players, but for everybody. You’ve got to worry about so many different players out there.”

When the Patriots offense is at its best, Brady takes the snap and quickly flings passes to shifty and speedy targets like Edelman and Danny Amendola, who exploit open spaces in defenses. Sometimes, the plays are so quick, they almost feel like rushes. But when coupled with the volume and their high rate of success, they are extremely difficult to defend.

Then, when cracks open up down the field, Brady can be selective in taking shots on deeper routes, especially to tight end Rob Gronkowski, one of the toughest covers in the entire NFL.

“The last couple of games, they had run the ball quite a bit,” Chiefs coach Andy Reid said after the game. “And in this one here, they came out and threw almost every down in the first half.”

Edelman hauled in 10 of his 14 targets for 100 yards, but did show some rust early on with four drops. Gronkowski caught seven passes for 83 yards and two touchdowns.

Martin chipped in with two catches for 57 yards — one of which came on a huge 42-yard reception in a scoring drive in the second quarter.

More than anything, however, the Patriots’ quick-release passing attack masks the one big deficiency the team has on offense.

The Patriots offensive line has been devastated by injuries all season. Left Tackle Nate Solder is out for the year. Guard Dan Connolly retired. Young players have had to fill in.

By snapping the ball and passing it so quickly, offensive coordinator Josh McDaniels took a potent pass rush like Kansas City’s — led by linebackers Tamba Hali and Justin Houston — and completely neutralized it.

“The rush just wasn’t getting there,” Hali said.