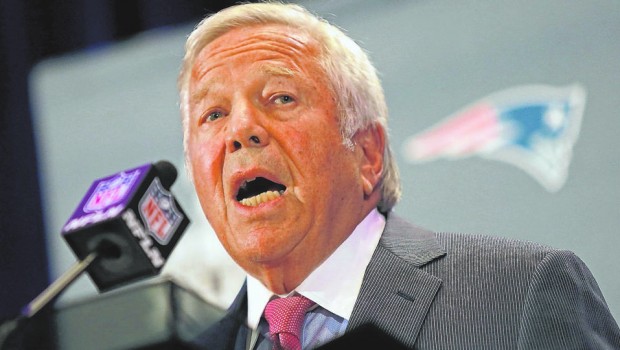 If you think the bombshell penalties imposed on Tom Brady and the New England Patriots for Deflategate are too harsh, remember this:

Brady laughed it off because, as a Super Bowl QB, he was too busy to bother with such trivialities.

Owner Robert Kraft (above) held at least two press conferences last January in which he would demand an apology WHEN his team was found to have been innocent.

And the Patriots’ arrogance and hubris was a big red flag to any investigator, let alone a great lawyer like Ted Wells, to keep digging until something was found that proved the Patriots were in fact guilty.

The four-game suspension of Brady, handed down by the NFL on Monday, and New England Patriots’ $1 million fine and loss of draft picks is the result of the quarterback and his team defending themselves when they should have explained themselves.

The Patriots’ response turned an obscure accusation — using illegally and deliberately under-inflated footballs — from minor rule-bending into full-blown spectacle. They upbraided detractors, evaded questions and defied the league. They could have avoided the entire mess if Brady had only admitted what he did.

The suspension is not about how much of an illicit advantage the Patriots gained (probably not much), the behavior of the NFL (suspect at best) or the flaws within Wells’s report (numerous). Poking those holes dances around the crucial issue: Brady flouted a rule, and then lied about it to the public and to investigators. The latter matters as much as the former.

It was an error of strategy as much as a failure of morals that got Brady benched for the nationally televised season opener plus another three games. The controversy mushroomed as the Patriots made misstep after misstep. Whenever they could have scuttled the story, the Patriots intensified it.

Humility would have quelled the controversy, but the Patriots’ arrogance sparked it. Coach Bill Belichick authored a 40-minute news conference about barometric pressure. Owner Kraft shrieked upon arrival at the Super Bowl and demanded an apology from the commissioner. Brady insisted to a room full of reports he was certain he had done nothing wrong.

All along, the Patriots waged a stonewall defense best suited for a court of law when they needed a charm offensive to sway the league and public opinion. Imagine Brady had stepped to the podium on the Wednesday after the AFC title game and said the following: “It’s true; we took a small amount of air out of the footballs once the officials checked the balls. I did not believe it violated the spirit of the rule or the integrity of the competition, but I was wrong and I apologize to the Colts, the NFL and the fans. I do not believe our actions impacted the outcome of our victory against the Colts, but I played outside the rules and I am willing to accept punishment.”