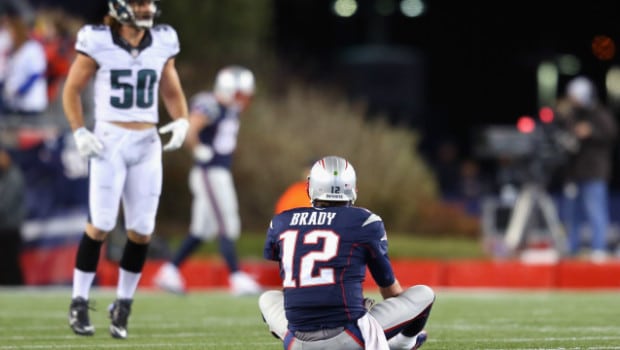 PATRIOTS ARE STILL STUNNED BY EAGLES UPSET ON SUNDAY!

Eagles coach Chip Kelly knows that no matter how long he coaches, and wherever the coaching road takes him, this breezy 52-degree Sunday will be an indelible memory. How often do you visit the toughest venue in the league, with your own squad severely wounded, and pull the upset of the year? Together, Bill Belichick and Tom Brady (above) have lost 15 regular-season games in Foxboro over 15 seasons. Together, Chip Kelly and the Eagles had embarrassed their franchise in the previous two games, giving up 45 points apiece to Tampa Bay and Detroit, the two worst losses of Kelly’s three seasons in Philly.