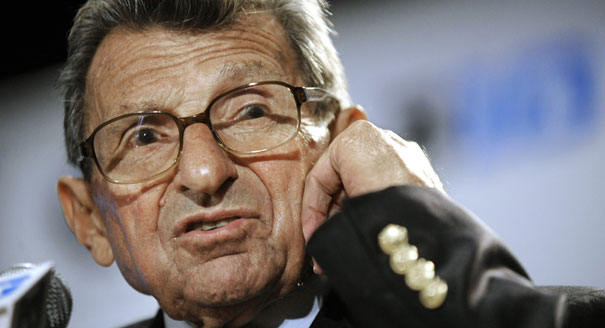 A man testified in court in 2014 that Penn State football coach Paterno ignored his complaints of a sexual assault committed by assistant coach Jerry Sandusky in 1976 when the man was a 14-year-old boy, according to new court documents unsealed Tuesday in Philly Common Pleas court.

The victim, who was identified in court records as John Doe 150, said that while he was attending a football camp at Penn State, Sandusky touched him as he showered. Sandusky’s finger penetrated the boy’s rectum, Doe testified in court in 2014, and the victim asked to speak with Paterno about it. Doe testified that he specifically told Paterno that Sandusky had sexually assaulted him, and Paterno ignored it.

“Is it accurate that Coach Paterno quickly said to you, ‘I don’t want to hear about any of that kind of stuff, I have a football season to worry about?’” the man’s lawyer asked him in 2014.

“Specifically. Yes … I was shocked, disappointed, offended. I was insulted… I said, is that all you’re going to do? You’re not going to do anything else?”

The documents stem from a lawsuit between the university and its insurance company. Sandusky was sentenced to a minimum of 30 years in prison after his conviction in 2012. Penn State settled with 32 victims, paid out nearly $93 million, and is trying to get reimbursed by its insurance company.

A man identified as John Doe 101 testified in 2014 that knowledge of Sandusky consorting in questionable ways with young boys who were not his children was well-known within the Penn State football program.

In 1988, Doe 101 said, a weight room assistant named Kevin O’Dea saw the boy lying on a black leather couch in an athletics facility, in his underwear, with Sandusky seated on the floor rubbing the boy’s back.

“Did Mr. O’Dea say anything when he came in and saw that?,” his lawyer asked.

O’Dea, who last coached with the Tampa Bay Buccaneers, did not immediately respond to request for comment Tuesday morning.

Doe 101 also testified it was well-known to the team and coaches that boys stayed in Sandusky’s room with him in the team hotel the night before home games in State College, and that he routinely showered with Sandusky and other coaches – including Paterno – and no one raised an eyebrow as Sandusky lathered up a boy who was not his son and engaging in “horseplay.”

The documents also includes new testimony from former Penn State grad assistant Mike McQuery in which McQuery said others on the Penn State staff were aware of Sandusky’s behavior around young boys, including current college football assistant coaches Tom Bradley and Greg Schiano. McQuery witnessed Sandusky raping a boy in a shower at Penn State in 2001, he testified in court, and informed Paterno of the incident.

In a 2015 deposition, McQuery testified he also briefly discussed what he had seen with Bradley, who is now UCLA’s defensive coordinator. When McQuery told Bradley what he saw Sandusky doing to a boy in a shower, McQuery said, Bradley was “not shocked.”

“[Bradley] said he knew of some things,” McQueary said. “… He said another assistant coach had come to him in the early ’90s about a very similar situation to mine, and he said that he had — someone had to come to him as far back as the early ’80s about Jerry doing something with a boy.”