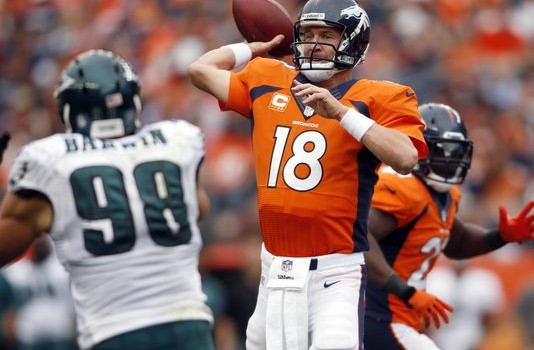 PAST-HIS-PRIME PEYTON TAKES $4M LESS — DOES HE NEED THE MONEY?

Peyton Manning is one of the NFL’s all-time greatest quarterbacks.

But in one important way he is just like anyone else who can’t tell when it is time to hang them up.

Does Brett Favre ring a bell?

Even though he ended the 2014 regular season and the playoffs looking like an ordinary QB with significantly reduced arm strength, Manning cannot give up the game he loves.

Manning and the Denver Broncos have agreed on a new contract for the 2015 season in which the five-time NFL MVP will take a $4 million pay cut.

Manning will make $15 million in base salary in 2015, league and team sources said, down from the $19 million he was scheduled to earn.

When the deal is finalized and signed, it will be Manning’s 18th year in the NFL since theIndianapolis Colts selected him as the first pick in the 1998 NFL draft. He missed the 2011 season with a neck injury.

“I don’t talk about my contract. I never have in 18 years and I’m not going to start now,” Manning told the Denver Post Wednesday afternoon.

“I’ve been working real hard and I’m excited to be back with the Denver Broncos. Can’t wait for April 13 to get here when the team can finally come together. I’m excited to get to work and get to know the new coaches and looking forward to trying to make 2015 a special year.”

Manning informed Broncos general manager John Elway on Feb. 12 that he was physically and mentally prepared to play the 2015 season after undergoing a comprehensive workout regimen and evaluation with noted performance trainer Mackie Shilstone.