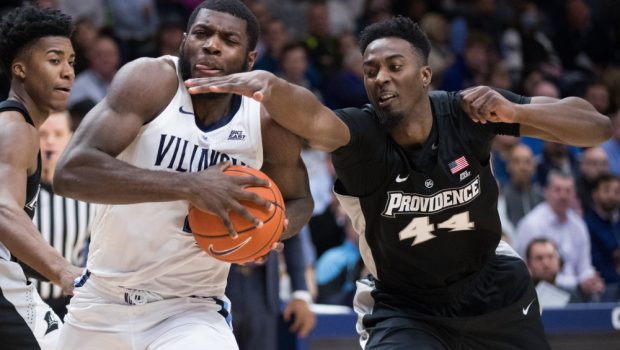 Eric Paschall had 20 points and 10 rebounds and No. 25 Villanova took control in final nine minutes to beat Providence 73-62 in the quarterfinals of the Big East Conference tournament.

Villanova capitalized on a 17-5 run to beat the Friars (18-15) for the third time this season.

Villanova will face the winner of the Xavier-Creighton game in the semifinals tomorrow at Madison Square Garden.

Nate Watson had 15 points to lead Providence, which was playing its second game in 18 hours. Alpha Diallo and Isaiah Jackson added 14 apiece for the Friars, who rallied from eight down to tie the game at 44 on a 3-point play by Diallo with 9:18 left.

Gillespie then took over. He hit a pair of 3-pointers in the big run while Paschall had a basket and 3-pointer. Providence drew to 63-58 on two free throws by Jackson but came no closer.

The opening 20 minutes was a series of runs. Providence took a 9-2 lead and the Wildcats responded with 15 straight points. The Friars came back and led 23-22, but Villanova closed the half with a 9-1 run that featured 3-point baskets by Gillespie, Cole Swider and a three-point play by Phil Booth.