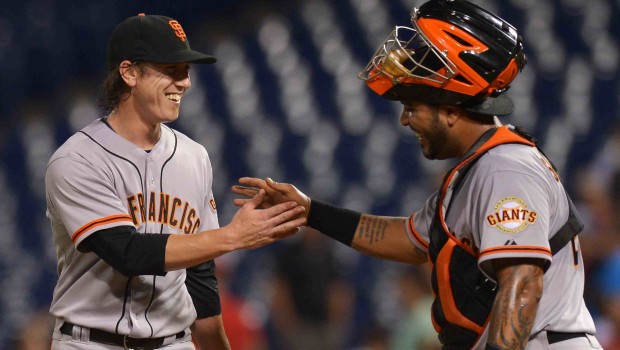 With the trading deadline eight days away, all the talk around the Phillies has focused on Jonathan Papelbon, the overpaid loudmouth who has expressed a desire to be dealt to a contender.

Which team headed to the postseason will pony up several prospects for Papelbon, who melted down last night and cost the Phils a victory.

Papelbon surrendered a game-tying homer to Buster Posey in the ninth, and the Phillies ultimately fell 9-6 to the San Francisco Giants in 14 innings on Tuesday. It was Papelbon’s third blown save.

“He’s been good all year,” Ryan Howard, who had two hits, said of Papelbon. “You can’t put it on him.”

Brandon Crawford hit a bases-clearing double to break the stalemate in the 14th and Tim Lincecum (photo above) earned his first career save.

Crawford snapped a 2-for-22 skid with his two-out hit off the wall in left-center field and finished with four RBIs. Posey, who also doubled and scored in the 14th, had four hits, including two doubles, two runs and an RBI on his homer.

“It was one pitch,” Phillies manager Ryne Sandberg said. “He was first-ball swinging.”

George Kontos (3-0) earned the win for the second straight night. Lincecum, San Francisco’s ninth pitcher, got the final two outs for the save. Jeff Manship (1-2) surrendered four runs and lost.

Hunter Pence had three hits, including a fifth-inning homer. Pence is a lifetime .353 hitter with 14 homers in 34 games against Philly, his former team.

Jimmy Rollins hit a two-run homer in the fifth, giving him five homers and 13 RBIs in his last 10 games.

Marlon Byrd had a pair of RBIs on a double and a groundout and made a great leaping catch into the right-field wall to rob Gregor Blanco of extra bases in the sixth.

Roberto Hernandez limited San Francisco to three runs on five hits over 5 2/3 innings, walked three and struck out one.

Ken Giles allowed one run in the seventh after entering the game with a 14 2/3-innings scoreless streak.

“His command wasn’t as good as it’s been,” Phillies manager Ryne Sandberg said. “But he hung in there.”