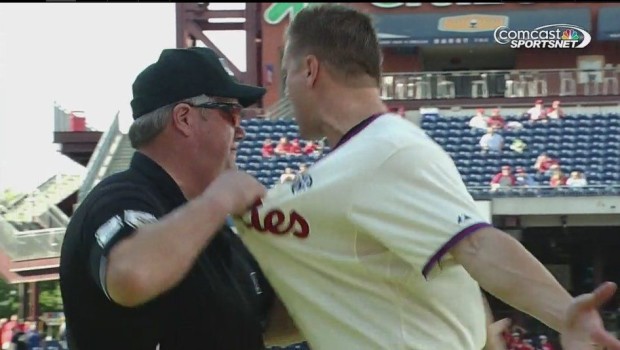 Jonathan Papelbon has spent three tempestuous years in Philly as an overpaid, whining closer on a team that desperately needs hitting and starting pitching.

So, his relationship with the fans has been less than ideal.

And on Sunday at Citizens Bank Park that relationship got much worse.

Papelbon allowed a career high-tying four earned runs and capped his ninth-inning meltdown by being ejected for a lewd gesture as the Phillies lost 5-4 to the Miami Marlins.

The incendiary veteran closer was tossed by second base umpire Joe West for grabbing his crotch as he walked off the field, and after an animated shouting match with two officials, left to a serenade of boos from the announced crowd of 30,201 fans. The winning run scored on a wild pitch.

“I saw him gesture to the fans … and that’s not good,” second base umpire Joe West (photo above) told a pool reporter. “That’s what I saw, and so did the plate umpire. You can’t do things like that. I told him, ‘You’ve got to go.’ And then he charged out of the dugout and his head bumped into my hat. And I grabbed him and I said, ‘Get off of me.'”

Papelbon (2-3), making his third appearance in as many days, entered the ninth inning with a 4-1 lead, but loaded the bases with nobody out. He was battered for four earned runs on four hits, a walk and a wild pitch while striking out one on the way to his fourth blown save of the season.

Papelbon strolled to the dugout and was staring into the crowd as he lifted a leg and prominently cupped his groin, but later said he was simply adjusting himself, and was surprised and angry by West’s insinuation.

Jarrod Saltalamacchia crushed Papelbon’s first pitch for a standup double. It was followed by a walk and a single by Adeiny Hechavarria to load the bases, before Jordany Valdespin finished off a 12-pitch at-bat by driving in the first run of the inning with a groundout to first.

Christian Yelich hit an infield single to score another run. Papelbon jump in a failed attempt to field it, tumbling to the grass. Justin Bour lifted a pinch-hit single to right field to tie the game.

Yelich scored the final run on a wild pitch, before Marcell Ozuna grounded out to end the inning, if not the spectacle.

“I had to make an adjustment and I did it and by no means whatsoever, I don’t even hear the fans out there,” Papelbon said. “When I am out there I am in the moment, the fans are irrelevant to me. I don’t even see them or hear them. To me, it’s pretty stupid, to be totally honest with you.

“The fans come and pay their money and want to see a good game. They have the right to boo and do whatever they want to do but an umpire gets caught up in that and starts trying to look for extra things he may think are going on. Just umpire the game and I don’t think we would have been in this situation.”

Papelbon needed 38 pitches to finish off the disastrous outing, the most in a single game since he threw 48 against the Chicago White Sox on Sept. 5, 2010.

Phillies manager Ryne Sandberg said even though Papelbon was pitching for the third consecutive day, his struggles were not a result of overuse.

“He’s done that before and he’s the closer,” Sandberg said. “That’s what they do, come in with a chance to close three games in a row. That’s what a closer does.”

He’s guaranteed $13 million from the Phillies next season and owns a $13 million vesting option for 2016, as well.

“By no means was I directing anything at any fans,” he said. “I mean, I have a 4- and a 5-year-old son and daughter. I am not out here doing inappropriate things. Come on this is baseball. This is what we do. Go look at the game and see how many people do that just in today’s game…

“Joe had no right to grab me by any means so I will file a complaint for that for sure.”