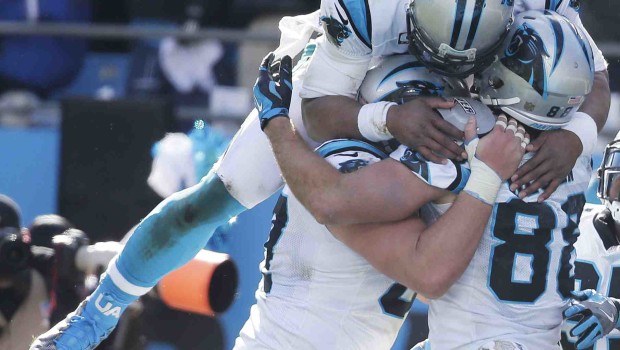 PANTHERS SWAMP SEAHAWKS, THEN HOLD ON FOR 31-24 WIN

The Carolina Panthers took control of the NFC from the two-time defending conference champion Seattle Seahawks with a 31-24 victory to advance to next Sunday’s NFC Championship Game against the Arizona Cardinals.

They did it with a first half that was as dominating as any performance in the NFL this season, particularly because it came against a team that played as good as any other in the league the second half of the season.

Now the top-seeded Panthers are a home win against the second-seeded Cardinals away from their first Super Bowl appearance since the 2003 season.

The Panthers backed up their NFL-best 15-1 regular-season record with a dominating first-half performance that was enough to advance.

They were, as safety Roman Harper said earlier in the week, “the better team.”

Carolina was the fresher team as well after a first-round bye. Nobody was fresher than running back Jonathan Stewart, who missed the last three regular-season games with a sprained foot.

Stewart went 59 yards on the first offensive play Sunday. Carolina’s biggest mistake was a fumble by rookie Cameron Artis-Payne on the play after Stewart’s run, but fullback Mike Tolbert recovered it.

From there the avalanche began, beginning with Stewart’s 4-yard touchdown run and followed by middle linebacker Luke Kuechly returning an interception 14 yards for a touchdown on Seattle’s second play to make it 14-0.

The first-half rout was unexpected.

It also was thorough.

Carolina’s next goal is to make sure there is no quick changing of the guard against the Cardinals next Sunday.