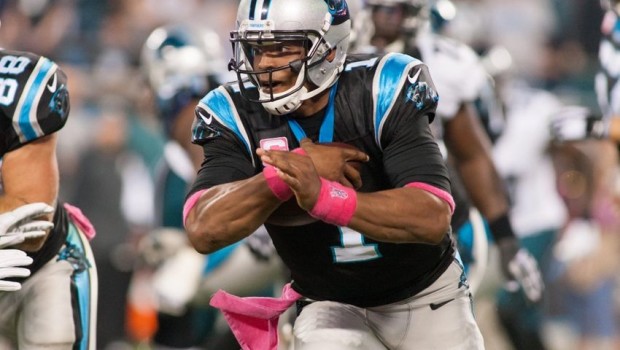 The Arizona Cardinals, after squeaking by a Hail Mary-happy Aaron Rodgers, the must now face an entirely different type of signal-caller in Carolina’s Cam Newton (above).

“He is a monster, per se, at the quarterback position,” said Pro Bowl cornerback Patrick Peterson. “Being 6-6 who can run for whatever, being the physical specimen that he is brings some special challenges. And he’s truly grown as a passer and a leader.”

The two go back a ways after squaring off in college, where Newton, the former Auburn quarterback, infamously dragged LSU’s Peterson into the end zone. Has he learned from that?

“Being 6-6 and 260 and getting downfield against DBs like me, that’s a very tough task,” Peterson said. “For me, I just try to tie his shoestrings for him, try to trip him up a bit. He’s a big, big human being so you can’t take him on up top. He’ll definitely make you miss that tackle. For a DB it’s all about taking out his legs. You can’t run without your legs.”

Newton was held to just three yards rushing last week against Seattle, but forget the statistics. Even the threat of Cam taking off keeps defenses guessing all game long.

Where Rodgers is a constant headache because of his pocket creativity and ability to escape pressure, Newton boasts the power and massive frame to take on defenders and win those matchups. Throw in his cannon arm, and this Panthers offense has the ability to tire out defenders and hang with anyone left in the NFL — including Peterson’s Cardinals.