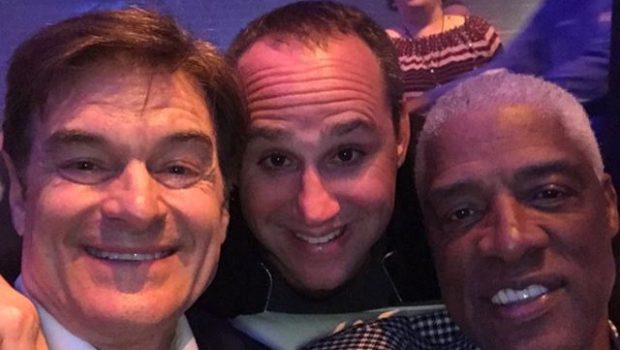 PANTHERS’ $2.5B PRICE TOO HIGH FOR PHILLY’S MICHAEL RUBIN?

I have no idea why a baby-faced Philly billionaire who owns a slice of the Sixers wants to own the whole Carolina Panthers.

But that’s a question only Michael Rubin can answer.

Bidding for the Panthers has reached a record $2.5 billion, Bloomberg reported, and that’s apparently too rich for Rubin’s blood.

Rapper and mogul Sean “Diddy” Combs and Golden State Warriors All-Star Stephen Curry were among potential minority partners with Rubin (middle above with Dr. Oz and Dr. J). At this point, billionaire businessman Joseph Tsai is the only confirmed partner with Rubin, sources told ESPN.

Rubin is willing to go higher than his initial bid, however, sources tell ESPN, and he remains interested at what he considers the right price, according to the source who spoke on the condition of anonymity because the bidding process is confidential.

Sources close to the process could not confirm to ESPN that the $2.5 billion is accurate. The Panthers are valued by Forbes at $2.3 billion. It is unclear what Rubin considers the right price.

The record for the sale of a professional sports franchise in the United States is the Houston Rockets, who were sold for $2.2 billion in 2017.