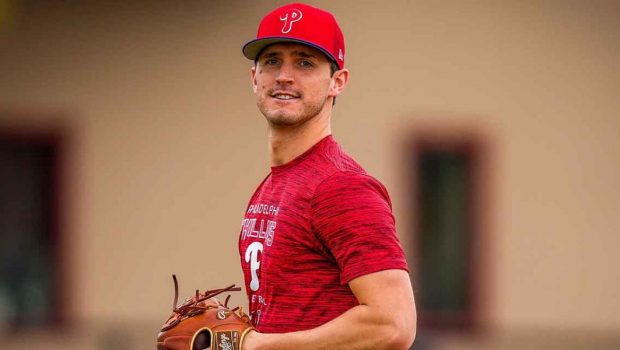 Andrew Painter (Phillies’ No. 1 prospect, per MLB Pipeline), Mick Abel (No. 2) and Griff McGarry (No. 4) will join the team in Clearwater, Fla., when pitchers and catchers report on Feb. 16. Painter and McGarry are expected to compete for the final spot in the starting rotation, along with Bailey Falter and Cristopher Sánchez.

The competition for the No. 5 spot — behind Zack Wheeler, Aaron Nola, Ranger Suárez and newcomer Taijuan Walker — is undoubtedly the biggest roster battle for the Phils this spring.

“There’s Bailey Falter, Sánchez, Painter, McGarry — there’s a whole bunch of guys. We just have to see what happens during Spring Training. See how they perform; they’ve got to stay healthy. We’ll figure it out by the end.”

Though Painter hasn’t pitched above Double-A, he has a legitimate chance to crack the Opening Day roster. He posted a 1.56 ERA over 22 starts between Single-A Clearwater, High-A Jersey Shore and Double-A Reading last season, all while striking out 155 batters in 103 2/3 innings.

McGarry also turned heads with his strikeout numbers in 2022, racking up 130 in 87 1/3 innings across three levels, including eight innings with Triple-A Lehigh Valley.

Here’s the full list of the 21 players who received non-roster invites on Tuesday, listed alphabetically by last name with their prospect ranking in parentheses: