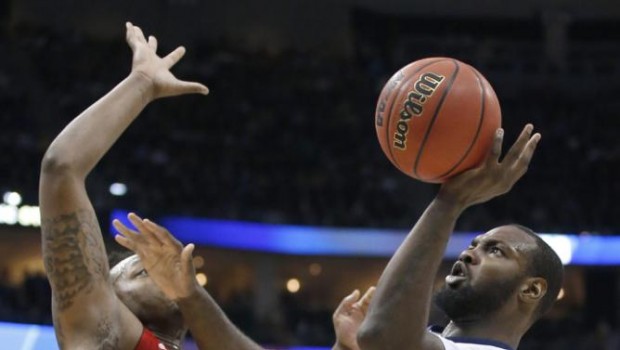 Villanova bigs JayVaughn Pinkston (above) and Daniel Ochefu were only 3-for-12 for the game, most from close in.

“The fundamental things apply, as time goes by.”

Remember that layup drill where you missed the shot on purpose so that the kid in line behind you could tip it off the backboard for the kid behind him to do the same?

Villanova brought that drill back to life Saturday. Unfortunately for the Wildcats, they showcased an extended miss-the-layup drill during their game with N. C. State.

So, thanks to that and three unflappable State guards led by Cat Barber and Trevor Lacey, the Wolfpack delivered the major upset the tournament had lacked, a 71-68 stunner at the expense of a No. 1 seed that had won 16 games in a row.

Missing a bushelful of bunnies in the first five minutes, the Wildcats couldn’t seem to turn it off, persisting in missing in-the-paint opportunities right up until they found themselves in a 32-28 halftime hole against the No. 8 seed.

When it ended, Villanova had shot a miserable 31 percent (19 for 61), a horror show that allowed the Wolfpack to outscore the Wildcats, 34-14, in the paint. North Carolina State’s able post players — Abdul-Malik Abu and Lennard Freeman hit 9 of their 17 shots against Villanova’s big men, JayVaughn Pinkston and Daniel Ochefu, who together made only three field goals on 12 shots.

“We weren’t really worried about our misses,” said Villanova senior Darrun Hilliard, whose 27 points led all scorers but could not save his team’s season. “We got good looks, and I just don’t think missing those easy baskets really fazed us.”

“I know we have to answer to the fact that we didn’t get to the second weekend again,” said coach Jay Wright in the minutes after his season leveled off at 33-3. “We’re not afraid to fail. We’ve got to accept it. We’ve got to own it. But it won’t define us.”

Villanova shot 29 percent in the first half and likely deserved to find itself in a bigger ditch than the modest four-pointer fashioned by North Carolina State’s willing gunners, who shot 13 for 27 from the field (48 percent).

And, when the Wildcats weren’t missing close to the basket, the Wolfpack was dictating failure-to-launch codes, most spectacularly when North Carolina State’s 6-foot-9 BeeJay Anya, the final-bucket hero against LSU here Thursday night, blocked a layup try by Villanova’s massive Daniel Ochefu. That came on Villanova’s final possession of the half and triggered a fastbreak the other way down the right wing.

Lacey let the clock blink to tenths of a second before launching a 3 that sent his ecstatic teammates to the locker room with what would be the full definition of momentum.

“We’re not expecting to come out and underestimate Villanova’s talent,” Lacey had said in the ramp-up to this one. “We can’t get down like we did against LSU against Villanova and expect to have a tremendous comeback like we did.”

This was not the first time the Wolfpack had set upon a No. 1 seed in the NCAA tournament and taken it down; it was just that it hadn’t happened in, oh, a quarter century or so.

In the spring of 1983 when the late Jim Valvano’s team toppled top-seeded Virginia, 63-62, then turned the same trick on Houston to win the title, 54-52, at the buzzer. Perhaps, you’ve seen that video a few million times.

As the second half began, Villanova’s misery near the rim seemed only to exacerbate. Ochefu’s first shot after intermission was a dunk attempt that flew off the iron, proving the Wildcats could not only miss from 12 inches; they could miss from zero inches.

Before the first media timeout of the second half, North Carolina State erected its biggest lead yet, 38-30, and now it was up to the Wildcats to see if they had a memorable comeback in them.

Barber’s soft jumper from the right wing then put the Wolfpack up, 42-33, and Cat’s performance in this tournament can’t come as a surprise to anyone who watched him scald Jamie Dixon’s Pitt Panthers for 34 points March 11 in the ACC tournament in Raleigh, N.C..

A poor shooting night is always just around the corner in this game, but Villanova was coming off a game when it had poured in 93 against Lafayette. It had to be pretty unnerving not to reach 40 against North Carolina State until only 10 minutes remained in the game.

“They were trying to take away our 3-point shots,” said reliable Villanova shooter Ryan Arcidiacono, who shot 2 for 8 and contributed just four points. “We should have looked for more mid-range shots.”

When Arcidiacono missed an easily floater in the lane with 4:15 remaining, the long-held suspicion that Villanova could not save itself calcified.