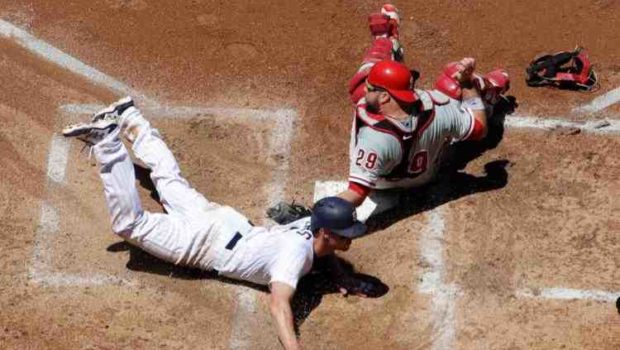 PADRES SWIPE A GAME, SWEEP A SERIES FROM PHILS 3-0!

Clayton Richard pitched a three-hitter and Wil Myers (above) stole three bases in an inning as the Padres beat the Phillies 3-0 for a three-game sweep.

Nick Pivetta (4-8) struck out nine of the first 10 batters, and fanned a career-high 11 in five-plus innings.

Myers, who has scuffled since the All-Star break, reached base four times. He became the first player since the Marlins’ Dee Gordon in 2011 to swipe second, third and home in an inning and the first Padre to ever do so in the fourth.

Myers’ final swipe came when he scored on the back end of a double steal after Hedges broke from first base. As Hedges was caught in a rundown, Myers headed for the plate and just got his hand in before Cameron Rupp’s tag.

“I wasn’t really mixing up my holds, I guess, enough,” said Pivetta, who was expected to optioned to the minors later in the day. “For the most part they ran a little bit extra today and that just was kind of the difference in the baseball game.”

Myers, who was in an 8-for-31 rut, drove in Carlos Asuaje with a single for a 1-0 lead in the fourth. Myers then got active on the bases to give the Padres a 2-0 edge. It was his first three-steal game and gave him a career-high 14 on the season.

The first nine Padres didn’t put the ball in play, with Myers reaching on a walk.

“He carried it for a while,” Phillies manager Pete Mackanin said. “He needs to understand and learn how to carry that through five, six, seven, eight innings or more.”