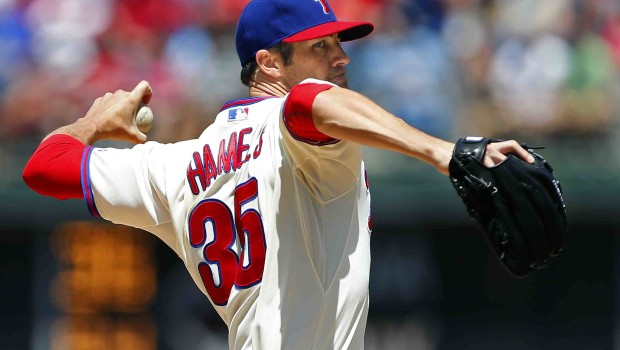 The Phillies are really trying to trade ace Cole Hamels.

We know this because MLB savant Ken Rosenthal mentioned on MLBTradeRumors.com that the San Diego Padres are still in contact with the Phillies about acquiring Hamels.

His report strangely indicates though, that some sources say the Padres don’t have the talent to get a deal completed.

Could this be true? Or is General Manager Ruben Amaro posturing and trying to drive the price up on Hamels? It’s no secret that the Padres have serious interest in Hamels, but some within the Padres organization do not want to empty their farm system of its most-prized prospects. I don’t hardly blame them, the system was already raided to upgrade the offense. Austin Hedges, Matt Wisler and Hunter Renfroe are the franchise’s top three prospects, and should not be cheap by any means.

The Phillies GM is on the record saying that he doesn’t foresee moving Hamels, and he also insists he thinks Hamels will be in a Phillies’ uniform this season. When you break down his statements. you see the words “foresee” and “thinks”. To me that is just posturing. He needs to stop playing games and get a deal done. Let’s face it, Hamels’ value has never been any higher. The time to get top dollar for his services is now. Last year, when Spring Training started, Cole Hamels was nursing a sore arm. He went on the make 30 starts and throw 200 innings.

The teams match up well for a potential deal. The Phillies are looking for a catcher of the future. Austin Hedges provides major league defense now, with a project bat. He is young though, and a defensive catcher is a rare commodity these days. They also need outfield help (Hunter Renfroe or Rymer Liriano) and a decent pitching prospect (Wisler orCasey Kelly) in return softens the loss of Hamels. The Red Sox are the only other team in close discussions with the Phillies for Hamels, but they too have been balking at Amaro’s asking price.

I do not, by all means, think the Padres should move all three top prospects for Hamels. Two out of the three with some minor tweaking here and there should easily get a deal done. Ruben Amaro is on such a hot seat that we here in California can feel the fire from here. He really needs to make a perfect trade to save his job. If he sits and waits for this miracle trade to happen, he is liable to be axed sooner than later.

I suspect that once spring training rolls around, and the smell of freshly cut infield grass fills the air, a deal can be consummated. Until then, the Phillies will play it off like they don’t want to move Cole Hamels and the Padres will wait patiently in the background waiting to pounce on him.