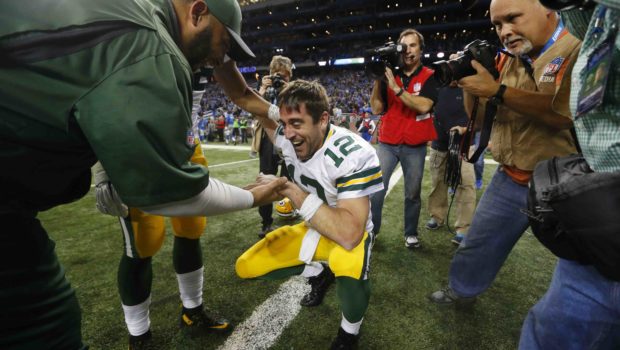 Just go down to the Chevy and I’ll hit you there!

That was the essential element of the Packers’ final offensive play against the Cowboys on Sunday,

There were a lot of crazy things about the play — the Packers converted a third-and-20, Jared Cook somehow kept his feet in bounds — but the craziest thing of all is that it wasn’t even in the Packers’ playbook.

According to Randall Cobb, Aaron Rodgers drew it up on the spot. Cobb said the final play was not an actual play call. Rodgers just told each receiver what to do, like a kid drawing in the dirt. Seriously.

Think about that: With 12 seconds left in a divisional playoff game, Rodgers ditched the playbook and went into full playground mode by drawing something up in the huddle.

Cobb then added that what Rodgers did was “Magic.”

If you missed the play, or just want to watch it 10 more times, here’s a look at the impossibly accurate throw made by Rodgers and the just-as-wild catch made by Cook.

The 36-yard throw-and-catch set up Mason Crosby for a game-winning 51-yard field goal attempt that he nailed as time expired to give Green Bay a 34-31 win.

After the game, Rodgers admitted that the final play was definitely some good, old-fashioned playground football.

“It’s just kind of schoolyard at times late in the game like that,” Rodgers told Fox. “Jared just kept on coming. I tried to put it in a good spot and he just made a hell of a catch.”

The other shocking part of the play is that Cook was able to keep his feet in bounds. Following the game, Richard Rodgers told NFL.com that Cook made a similar catch in practice earlier in the week, but he couldn’t keep his big feet in bounds.

“He had a similar play like that in practice this week but his foot was too big so he stepped out of bounds,” Rodgers said. “We were making fun of him, so I think that’s why he kept his feet in this time.”

To recap: Rodgers drew up a play in the huddle that converted on a third-and-20 to a tight end who couldn’t catch a sideline pass during practice, and all of that set up a game-winning 51-yard kick from a kicker who had never hit a go-ahead field goal of over 50-yards in the fourth quarter in his career before Sunday’s game.