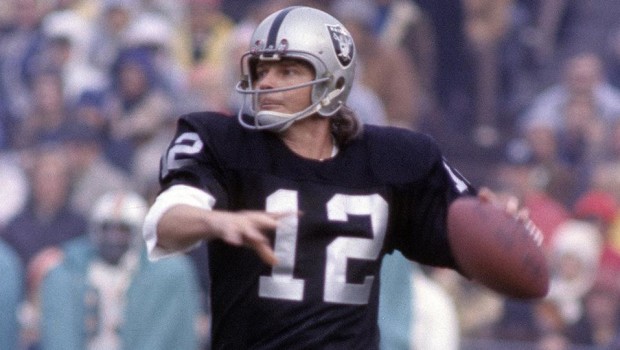 Green Bay Packers quarterback Brett Favre headlines the Pro Football Hall of Fame’s Class of 2016. The three-time league MVP, in his first year of eligibility, was elected for enshrinement Saturday.

Dick Stanfel and Ken Stabler (above), the two nominees from the seniors committee — for players whose careers ended more than 25 years ago — also will be enshrined in the class, as will former San Francisco 49ers owner Edward DeBartolo Jr., who was nominated as a contributor.

The full eight-member class was elected by the Hall of Fame Board of Selectors at a meeting yesterday in a San Francisco convention center. To be elected, a HOF finalist must receive 80 percent of the votes cast by the board.

For Favre, being a Hall of Famer in the company of some childhood heroes is not something that is quick to sink in.

“I totally get that I’m in the Hall of Fame, but I don’t necessarily accept it,” Favre told ESPN. “… Roger Staubach was my hero. He was my idol. I wanted to be Roger Staubach, and he knows that because I’ve told him before. I’m in an elite club with him now. From the outside looking in, I’m equal to him, but I will never feel that way. I feel like I’m on borrowed time or whatever you want to call it.

“Don’t get me wrong: I could not be more thankful and honored,” Favre continued. “Really, NFL Hall of Fame for a little country boy from south Mississippi who ran the wishbone? You know, anything can happen. I just can’t believe I’m amongst the guys I emulated and hoped to be someday.”

Ron Wolf, the former Packers general manager who acquired Favre in 1992, compared his perception of Favre’s potential at the time of the trade to the heights Favre reached in Green Bay.

“When I traded for Brett Favre, I thought he would be sensational. He became incomparable,” Wolf said in a statement. “They say that old Yankee Stadium was the house that Ruth built. Well, the Lambeau Field reconstruction is the house that Favre built.”

Terrell Owens, in his first year of eligibility, did not make the cut from 15 finalists to 10. Owens announced on Twitter that he had not been elected.